Hands-on with the new 9.7in iPad: it's even better value 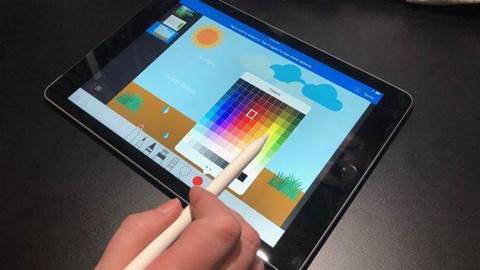 Apple’s 2018 mainstream tablet now has Pencil support – at half the price of the iPad Pro.

If there has ever been a more low-key Apple event, we can’t remember it. Nevertheless, Apple’s newest iPad is a major release because, well, it’s a new iPad.

Apple is largely pitching the 2018 9.7in iPad at schools, perhaps due the increasing presence of Microsoft and Google in the education market. Presumably, the company thinks business users are more attracted to its higher-end iPad Pro range.

But everyone loves a bargain, and the 9.7in iPad is around half the price of the Pro, which is a pretty strong incentive for small business users to at least consider Apple’s mainstream tablet.

It’s not that there are a lot compromises with the new 9.7in iPad either. The iPad Pro has a bigger and better screen (10.5in or 12.9in), a faster processor and the Smart Connector for adding the optional Smart Keyboard that allows it to be quickly turned into a laptop replacement.

However, the 2017 9.7in iPad was already a very good tablet and the 2018 model has to some extent closed the gap with the Pro, with a processor upgrade and support for the Apple Pencil.

In fact, the new iPad’s support for the Pencil offers all the same tilt and pressure-sensitive features as the iPad Pro range. 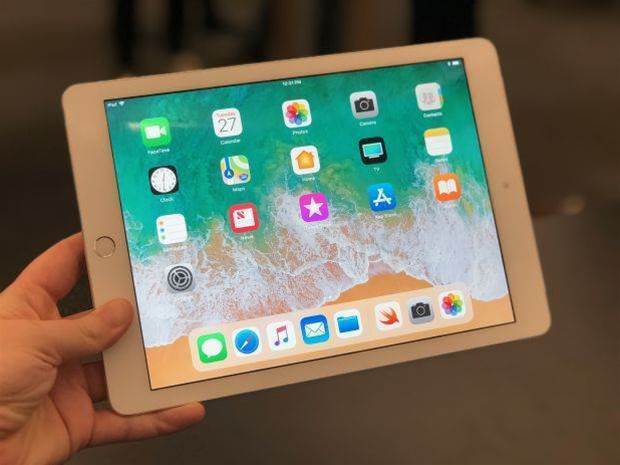 The Apple Pencil itself hasn't had any upgrades. That means it feels and works in the same way as before. There’s no discernible differences between using the Apple Pencil on the new, cheaper iPad and using one on the iPad Pro; it simply offers a new opportunity for Apple to convince people of the benefits of styluses and to shift more units.

Even more interestingly, it will now be possible to purchase third-party pressure-sensitive styluses for the iPad, such as new the Logitech Crayon, announced alongside the new iPad. Australian availability and pricing weren’t available at the time of writing, but in the US the Crayon will retail for US$49, around the half the price of the Apple Pencil.

Unfortunately, however, the new iPad still doesn’t have the Pro’s Smart Connector for connecting the Smart Keyboard. That’s disappointing, given its main target market – teachers and students – do a fair amount of typing: they’ll to make do with a clunkier Bluetooth keyboard.

Elsewhere, however, not a lot has changed from the previous version. In terms of its looks and its physical attributes, it’s identical to the 2017 iPad. It has the same measurements and weight, and hardy surprisingly, it feels the same in the hand as well, with an excellent display and a highly responsive feel.

As before, the new tablet has a 9.7in 2048 x 1536-pixel resolution display filling most of the front of the device, which is beginning to look a little old-fashioned in the face of the shrinking bezels we’re seeing on the latest mobile devices and laptops. On the rear is an 8-megapixel f/2.4 camera accompanied by an f/2.2 1.2-megapixel “HD FaceTime” camera at the front and, yes, there's still a Touch ID button below the screen.

Inside, there’s a processor upgrade to the new Apple A10 Fusion, which is significantly faster than previous model’s A9, but still lagging the Pro’s A10X Fusion. Storage is unchanged at 32GB or 128GB and, you probably won't be surprised to discover, there’s still no microSD for expansion.

More interesting is the way Apple has updated the core apps and enabled collaboration. There are new versions of the Pages, Numbers and Keynote apps with extensive support for the Apple Pencil.

The Pencil is, of course, useful for taking rough notes in meetings, but it really comes into own when used with these new apps. The Smart Annotation feature on Pages, for example, is slick with the Pencil and you soon forget you're annotating a digital file on a touchscreen. Of course, you don't get the same feedback (and satisfaction) as using a pen on paper, but it's very close.

Beyond the core apps, a software highlight for us was GarageBand. Apple has added features to make it more kid-friendly, namely adding animal sounds in the library, introducing colourful icons to represent changes in vocal tone (such as a robot to make a voice more robotic), and more automated features to help children – and 30-year-old music novices – create compositions.

For schools, there’s a host of education-focused software and teacher aids for use in the classroom and an IT management suite.

Not so cheap is the Apple Pencil, which sells for $145, which is a shame considering Pencil support is probably the 2018 iPad’s best new features. More disappointing is the lack of connectivity with the Smart Keyboard.

Overall, however, our early verdict for 2018 9.7in iPad is it’s even better value than the 2017 version – and, factoring in the huge library of iPad apps, it’s likely to be the best tablet at its price point. We’ll confirm that (or otherwise) in a full review after we’ve spent more time testing it.