Hands-on with the Google Pixel 2 and Pixel 2 XL 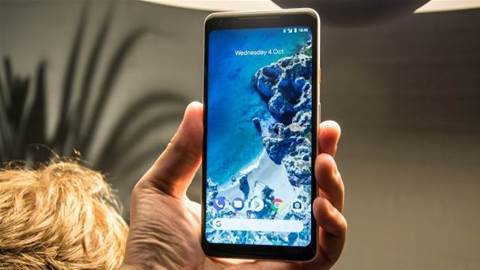 Google’s second-generation flagship smartphones deliver on their promise – but at a price.

The Google Pixel 2 and larger Pixel 2 XL have just been announced at Google’s “Made by Google” event. The announcement attracted a lot of interest, firstly because they’re from Google of course, but also because the original Pixel handsets were among last year’s surprise hits.

The search giant’s first stab at creating its own smartphones from the ground up was a roaring success, garnering critical praise and a substantial fan following thanks to a stunning camera, a sleek design and slick, intuitive software.

Faced with the ‘tricky second album’, Google has a lot to prove with its second-generation flagships. Will the company be able to build on its early success, or has the novelty of the Pixel worn off?

We managed to get our hands on the Pixel 2 and Pixel 2 XL. Here are our early impressions.

These days, design is one of the biggest differentiators between smartphones. As technical capability starts to plateau, how a phone looks is at least as important as how it performs – especially when customers are being asked to drop $1000-plus on it.

The original Pixel XL was one of the best-designed phones we’ve tested – it felt solid and sturdy without weighing too much, and despite being thicker than most of its rivals, it sat in the hand so well that it fooled you into thinking it was much smaller than it actually was. 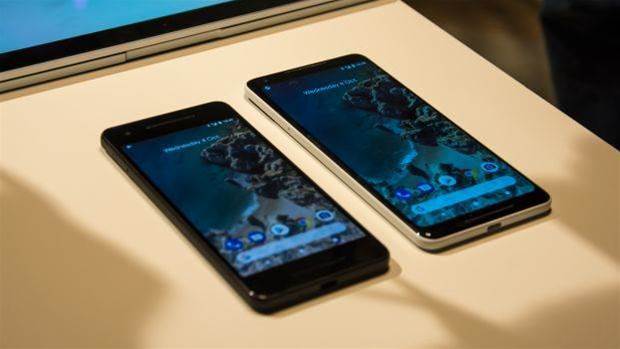 Aesthetically, there have been a few minor changes. Google has ditched the chunky rear chamfer in favour of a rounded rear shell, the glass plate covering the top of the back-plate is now shorter and wider, and the screen bezels have shrunk, mirroring the edge-to-edge display of the Galaxy S8.

It feels absolutely gorgeous in the hand; the textured aluminium casing is lovely, and it feels svelte and well-balanced to hold, despite the fact that it's not the slimmest device on the market.

The alterations, subtle though they are, combine to create a really rather lovely device. It's nowhere near as flashy as the Apple or Samsung's flagships, but it's genuinely well-made, and feels satisfyingly premium to use.

As with the design, Google hasn't taken any great leaps with the latest screens. Like last year's model, the Pixel features a 5in, 1920 x 1080-pixel panel, while the larger XL sports a 2880 x 1440-pixel screen.

The only difference, aside from the fact that both devices now feature a Samsung-style ‘always-on display’, is that the Pixel 2 XL has a 6in display rather than its predecessor's 5.5in panel, and has swapped the standard 16:9 aspect ratio with an ultra-tall 18:9 aspect ratio similar to the Galaxy S8 and LG G6.

We’ll run our display tests for a full review as soon as we can, but our initial impression that the Pixel 2's display's quality is lovely, with the OLED panel delivering rich, vibrant colours and pin-sharp detail, even on the lower-resolution Full HD version. The QHD+ Pixel 2 XL is even more impressive, with a pOLED display and a 538ppi resolution. Both deliver absolutely sublime visuals, with spectacular contrast and colour accuracy.

You'll be unsurprised to learn that the Pixel 2 is fitted with a Qualcomm Snapdragon 835 – the same processor that's been at the heart of most new Android flagships. It's paired with 4GB of RAM, which matches most rival flagships like the HTC U11 almost exactly. 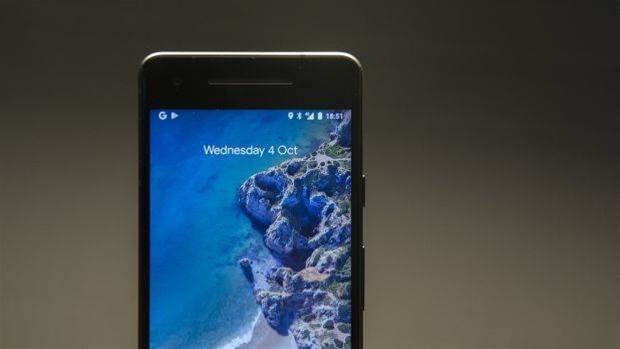 As such, we're expecting the Pixel 2 to go like the wind. Identically outfitted devices could put on a serious turn of speed with those components, and given Google's proven skill at software optimisation, we wouldn't be surprised if the Pixel 2 managed to top our performance charts when we’ve had time to benchmark them.

In practice, the Pixel 2 naturally felt smooth, zippy and generally slick to use, which is no shock. The true test, of course, will come once we can get it into the labs and run it through our suite of performance benchmarks, but on first impressions it seems highly capable indeed.

Battery life is still a make-or-break issue for most phones and with more and more phones achieving figures of 20 hours and above in our video-rundown battery tests, the bar is getting higher all the time. The original Pixel was passable, with a score of less than 16 hours, but we found that its real-world battery life was significantly better than these results would indicate. On top of that, it had fast-charging capabilities to ensure that it was easy to top back up again.

The Pixel 2 features the same 2,700mAh battery as the original predecessor, while the Pixel 2 XL's battery capacity has been bumped up by 100mAh. Given that not much has changed on the hardware side, we'd expect the Pixel 2 to comfortably match its predecessor in terms of battery life – or even exceed it, particularly in everyday use. Fast-charging has made a return too, promising seven hours of charge in just 15 minutes, so we're not expecting battery life to be a problem at all.

First up, bad news: Google has followed Apple by removing the headphone jack, presumably to cut down on the device's thickness. And while we think wireless headphones are a superior option, removing choice is a step backwards – and plenty of other ultra-slim phones have managed to keep the headphone jack. Still, at least Google includes an adapter to connect regular headphones.

On a much more positive note, Google has finally got with the programme and introduced waterproofing to its flagship device. It's one of the most useful features of the past few years, and it's now one more area where the Pixel can go toe-to-toe with the rest of the industry's most popular phones.

Sadly, expandable storage is still nowhere to be seen. The ability to add a microSD card for extra storage space is a useful feature that’s available on most other Android phones, but at least the new Pixels include 64GB of onboard storage as standard, with an option for 128GB. Google's offer of unlimited full-resolution storage for pictures and video via Google Photos is back as well.

Unsurprisingly, Google has put a huge emphasis on the Pixel 2's software. The Pixel's clean, intuitive UI and clever software features were one of the best things about the device, and the Pixel 2 ups the ante even further with a slew of software and AI-based enhancements. 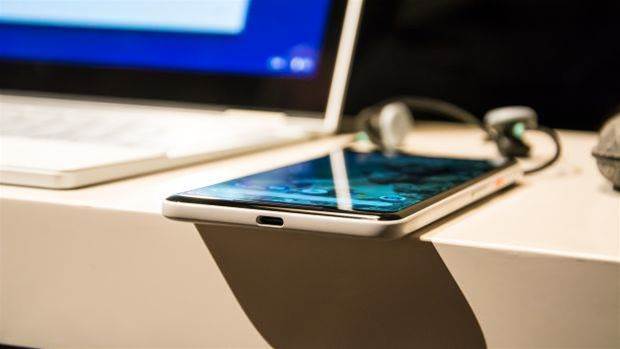 As with the first version, the Google Assistant is baked into the Pixel 2 from the ground up. Along with long-pressing the home button, you can also squeeze the device – similar to the HTC U11's squeezy interactions – to summon the Assistant.

The camera includes a load of augmented reality (AR) features, the Assistant supports the Routines recently introduced for Google Home, and it uses machine learning to automatically identify songs that are playing around you, displaying them on the lock screen.

As you’d expect, the Pixel 2 will also launch with Google’s latest mobile operating system, Android O, as standard, and will be first in line for new security and feature updates.

The unquestionable highlight of the first-generation Pixel was its camera, a snapper which has remained unbeaten by any other phone - until now. The Pixel 2 has earned an unprecedented score of 98 from camera testing group DXOMark, smashing the first Pixel's previous record to become the highest-rated smartphone camera in history.

This score isn't awarded lightly, so the Pixel 2 looks to be the best smartphone camera ever. The 12MP, f/1.8 rear camera features optical image stabilisation (OIS) and HDR+, resulting in some amazingly impressive and high-quality shots. As if that wasn't enough, it also includes iOS-style motion photos and portrait mode.

This last feature is particularly interesting, as most other phones that offer a similar feature do so by using a dual-lens configuration, but the Pixel 2 just has the one lens. Instead, it uses AI to distinguish between the background and the foreground. This means that you can take portrait mode selfies with the front camera as well. 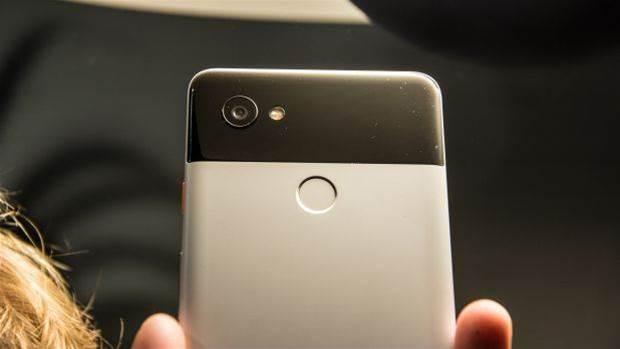 Video is equally well-served, with the Pixel 2 able to apply both OIS and electronic image stabilisation (EIS) to a video simultaneously. This ‘fused video stabilisation’ is perfect for shooting on the go, when motion would otherwise render videos all but unwatchable.

Google has followed up its debut phone with a device that is both polished and powerful. Combining top-class software and formidable hardware, the Pixel 2 and Pixel XL 2 are flagships to rival the likes of the latest iPhone or Galaxy models.

The only fly in the ointment is that Google has joined Apple and Samsung in increasing pricing of the higher-end models: while the Pixel 2 will cost $1,079 with 64GB of storage, it will cost $1,229 with 128GB, while the XL 2 will set you back $1,399 (64GB) or $1,549 (128GB). That's seriously pricey, and what’s worse, it looks like they’re still Telstra exclusives, like the original Pixels, for those wanting to buy on contract.

There’s no word yet on how much the latest handsets will cost on a Telstra contract, but it’s not likely to be less than the original Pixel, which currently costs from $69 per month (for 2GB) or $99 for the Pixel XL. That’s cheaper than Telstra’s equivalent plan for the iPhone 8 ($79) but, comparing the larger-screen handsets, more than the iPhone 8 Plus plan ($87). And, of course, you can shop around for better deals for the latest Apple and Samsung flagship phones, which are available from all major providers.

The good news is that at the time of writing, you can pick up the original Pixel for under $800 from the likes of Kogan and JB Hi-Fi, while the Pixel XL can be found for under $950 if you shop around. While there are significant improvements in the latest handsets, the originals are still very good phones.

Still, if you can stomach the price of the new Pixel 2 or Pixel XL 2, you’ll likely be getting one of the best Android phones that money can buy. We’ll confirm that in a full review once we’ve spent more with and benchmarked the new handsets.

You can join Google’s waiting list for the new Pixels now, or pre-order at Telstra or JB Hi-Fi from 20 October.