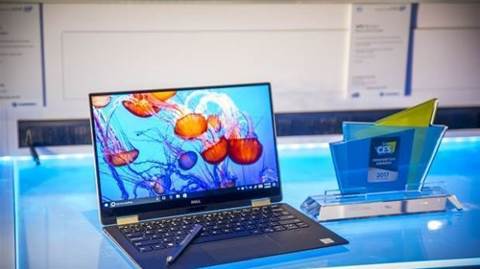 The XPS 13 was one of our favourite laptops of last year, but can the new Dell XPS 13 2-in-1 match that success?

If you’re a Windows user, last year’s Dell XPS 13 was probably the machine you coveted. If what you really wanted was an XPS 13 that converted into a tablet, Dell’s just granted you a late Christmas present in the shape of the XPS 13 2-in-1.

The new XPS is thinner and lighter than its non-swivelling sibling, at 1.24kg compared to 1.29kg of the normal touchscreen XPS 13 and 13.7mm thick at its fattest point. Thanks to Intel’s latest generation (Kaby Lake) Core processor, which runs at a base frequency of 1.3GHz, it’s also completely fanless, and this has the benefit of allowing Dell to use thinner feet on the bottom of the machine.

The result is a laptop that feels a little closer to Apple’s MacBook but which has a larger (and brighter) touchscreen and better all-round performance thanks to that latest generation processor. 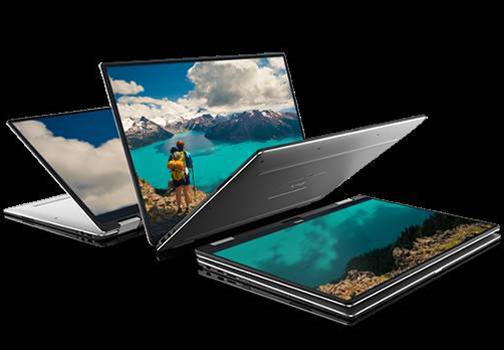 The screen has the same edge-to-edge almost bezel-free design that made the original XPS 13 so popular. Globally, Dell is offering models with either Full HD (1920 by 1080 pixels) or QHD+ (3,200 x 1,800 pixels) panels but, at the time of writing, it’s currently offering only the higher-resolution models in Australia. And there’s a big price for the extra pixels – battery life.

Dell claims the Full HD version gets around 15 hours, but the QHD+ panel brings it down to eight hours. That’s a big sacrifice: basically, it’s the difference between being an all-day machine and a plug-it-in-at lunch laptop. However, there’s no denying that QHD+ screen is stunning.

We weren’t able to run our benchmarks in the time we spent with the XPS 13 2-in-1 but it certainly felt as snappy as any Windows laptop in normal use.

Our test unit included an Intel Core i7-7Y75, a 1.30GHz dual-core chip that can go all the way up to 3.6GHz when needed, though only in bursts. We're looking forward to seeing how it performs in our benchmarks, but we expect it to be powerful enough for everyone except creative professionals and other demanding users.

Where the XPS 13 2-in-1 beats anything Apple is currently shipping is in the plethora of ports on offer. Of course, you’re not going to get Ethernet or full-sized USB in something this thin, but what do you get is impressive.

There’s a pair of USB Type-C ports, one on either side, which means you can happily plug your machine in on the left- or right-hand side. However, the two ports differ in one important way: the left-hand USB Type-C port is also a Thunderbolt 3 port, whereas the right-hand one isn’t. Included in the box is a USB Type-C to regular USB adapter.

Added to this there’s a 3.5mm headphone port and a microSD card slot. It’s not quite the full SD card slot that would make all photographers happy but it’s at least a step in the right direction.

The design is the same combination of carbon fibre and aluminium that looks so good on the regular Dell XPS 13, but there’s a small change. The bezel beneath the screen houses two lenses for a Windows Hello-compatible camera, which means you can log in using only your face. This will require Windows 10 Creators Edition, which is coming in a few months. As if that wasn’t enough, there’s also a fingerprint reader so you can log in using your finger instead. 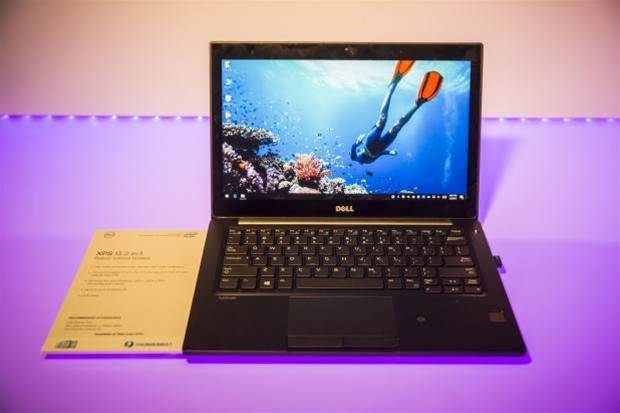 Another area where Dell hasn’t compromised is the keyboard. Although the company apparently tested super-low travel keys (as with the MacBook and MacBook Pro), most typists will be pleased to know they passed on them, and used an extra millimetre or so to deliver a slightly deeper action. This is a hard one for me to judge – I’m happy with a very shallow travel – but I felt the difference, so you will to.

What makes the 2-in-1 different from the XPS 13, of course, is the fact that it’s, well, a 2-in-1. Push that screen back all the way and you can rotate it all the way round, leaving you with a tablet instead of a laptop.

Not everyone is likes this kind of form factor, but judging by the growing popularity of these flip-over hybrids, plenty of people find them appealing.

How does the Dell compare to others of this ilk? The fact that it’s already thin and light plays in its favour; it means it feels more "tablet like" when you use it that way. It’s not as close to a pure tablet as a device with a detachable keyboard, but it’s pretty good.

Should you buy it?

Even if you leave aside the tablet capability, the Dell XPS 13 2-in-1 is a thin and light 13in laptop that feels really good on your lap, on a desk, or wherever. If you like having a notebook that’s as portable as possible, you’re going to love the XPS 13 2-in-1 even if you never swivel that screen all the way around.

It’s just a shame that Dell isn’t offering the Full HD model here (at the time of writing) for those who want full-day battery life – or a more affordable option. Pricing for the QHD+ units starts at $2,299, with the entry-level model including an Intel Core i5-7Y54 processor, 8GB RAM and 256GHB solid state drive.

Even so, based on what we’ve seen so far, we think Dell is on to a winner.