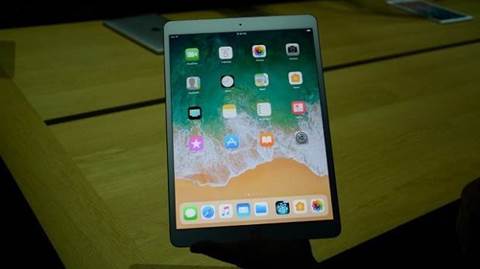 We give our first impressions of the svelte new iPad Pro, the next iOS update and Apple's new augmented reality platform.

Apple has just unveiled its new 10.5-inch iPad Pro, which replaces the previous 9.7in model, and we managed to get some time with the new tablet computer, along with a chance to try some features in iOS 11 and the company’s new augmented reality (AR) platform.

These and other new products and technologies were announced at Apple’s annual developer conference, WWDC 2017.

Design-wise, the 10.5in iPad Pro is very much like the 9.7in model. While its body is fractionally larger, it gets the most of its display thanks to newly slimmed bezels – down by 40%. It’s not quite on par with the Samsung Galaxy S8’s approach to bezel-less “infinity display” design, but the screen real estate feels substantial. Importantly, it also weighs the same as the 9.7-inch iPad Pro, at 477 grams.

Inside the 10.5in iPad Pro is a new 64-bit A10X Fusion chip, while Apple claims the display is 50% brighter than those in older models. At a glance, the colours on the iPad Pro screen really stand out, and the new 120Hz refresh rate makes working with the Apple Pencil feel responsive – at least for a few minutes.

We were able to use the 10.5in iPad to try a demo of Apple’s new augmented reality platform for developers, called ARKit. Pitched as the largest AR platform in the world, the idea is that app makers will be able to make use of the iPad’s built-in camera and motion sensors to make virtual experiences for gaming, industry and more. In the demo, we were able to move some pre-rendered objects – including a candle and a vase – around a real-world table. ARKit was able to automatically judge the size and depth of the physical object, and adeptly layer the AR paraphernalia on top. 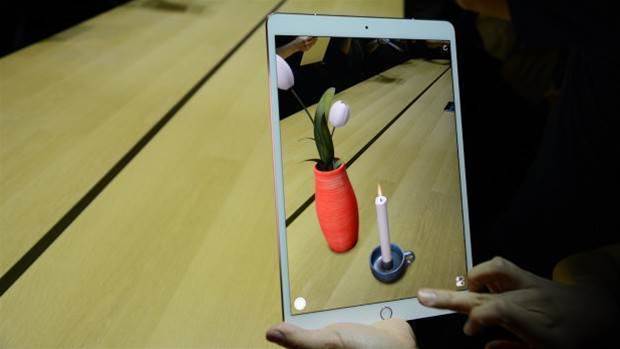 The second part of the demo showed a similar process in action, this time with a Star Wars-themed game of chess. It was a fun, albeit superficial example of how AR could work with the iPad, and we’re interested to see how developers take this in more meaningful directions.

With the 10.5in iPad Pro, the balance between screen size and weight made it easy to wield the tablet like a window into an AR world, although we’re not yet sure whether we’d want to do this for extended periods of time.

We were also able to briefly try some of iOS 11 features for the iPad Pro. We’ll have a fuller account of iOS 11’s various features for you soon, but our quick experience was that the new multitasking tools work a charm.

Particularly useful was the ability to drag and drop apps as floating sidebars that snap onto the side of the screen. You can also drag and drop content such as text or images between apps, while Files lets you use multi-touch to grab multiple thumbnails and shift them about as a single group. (See below for more features in iOS 11).

Apple has been keen to present the iPad as a professional device, despite declining sales over the past year. With a newly tweaked model, coupled with a greater focus on multitasking in iOS 11, the new iPad Pro could be the model to really push that vision.

Meanwhile, Apple has also revealed a host of new features coming in iOS 11, its next mobile operating system which is due out later this year. iOS 11 adds a slew of major new features for everyone – but also sees a new focus on iPad which, Apple clearly hopes, will elevate the tablet into a bigger league of productivity.

With the iPhone being the world’s most popular camera, it’s no surprise that photography was front and centre. The company announced that Portrait Mode pictures using the iPhone 7 Plus would now using optical image stabilisation, True Tone flash and HDR, which should lead to significant improvements in portraiture. Live Photos gains the ability to loop or bounce scenes forwards and backwards, and Apple in adding a new file format called High Efficiency Image File Format which reduces the size of images taken on iPhone 7 and 7 Plus.

Siri is gaining both a minor visual update and new higher-quality voices in iOS 11, but there are also some improvements to SiriKit which will allow developers to more deeply integrated Siri into their apps. SiriKit has now been extended to new categories, such as to-do lists, notes, reminders, and banking, allowing developers to add Siri features.

As well as some visual improvements such as a redesigned app drawer, at long last messages will be synced across devices. More importantly, Messages is gaining support for person-to-person payments using Apple Pay, allowing you to send and receive money easily.

Apple Maps is gaining indoor mapping instructions, so you can now get completely lost both inside and outdoors. There’s also lane guidance to help avoiding missing turns. As an added safety feature, Maps now includes a new mode called Do Not Disturb While Driving, which can automatically detect when you’re driving a car, silence notifications, and optionally send out an auto-reply to anyone who texts you.

One of the biggest announcements was ARKit, a new set of application programming interfaces (APIs) for creating augmented reality applications. Apple showed a simple demo application which allowed you to drop virtual objects such as a cup of coffee (complete with steam) on to a desk. When a virtual lamp was added, ARKit took care of shadows on other virtual objects automatically, making the scene much more realistic.

But the highlight of the AR section was a demo by Peter Jackson’s new studio Wingnut AR, showing a complex scene created in Unity. This included a landscape with buildings, virtual people running around, and flying vehicles attacking the “town” – all rendered in AR, in real time. The company will be releasing “AR experiences” on iOS later this year.

The iPad gets some love

Apple also showed off iOS 11’s new features designed specifically for the tablet. Front and centre is a new customisable dock which is capable of stretching the full width of the screen when in landscape orientation. Part of the dock is devoted to your most frequently used applications, and a redesigned app switcher works with the dock to allow you to drag and drop apps from dock to either side of the screen. Swiping between workspaces lets you store and use different pairs of open applications at the same time.

At long last, iOS includes a Files application which gives you much more powerful control over your file system, with integration for cloud services including iCloud Drive, Box, Dropbox and more. Files can be dragged and dropped around with new gestures, and the app includes a Recent tab which shows your most recently-used files no matter where they live. 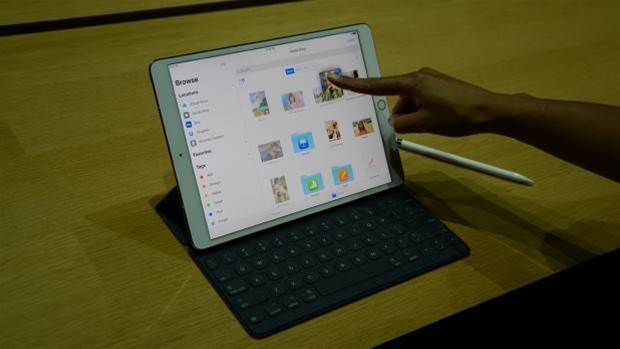 Drag and drop supports extends to moving text and graphics between applications too. As you would expect, you can drag from one side of a split view to another – but you can also drag between workspaces using multitouch gestures.

Support for Apple Pencil has also been massively improved, with a souped-up version of the Notes app with support for inline drawing – one of the biggest complaints about the current Notes. Users can also tap on the lock screen with the Pencil to quickly open a Note.

This story includes articles on Apple's new 10.5in iPad Pro  and iOS 11 that originally appeared at alphr.com.