Now the dust has settled on Apple's WWDC announcements, it's time to put iOS 9 to the test

If Apple's 2015 WWDC keynote was notable for one thing, it's that very few – if any – of the upgrades, new features and services were actually new ideas. As the presentation rumbled on, I was shocked at how many times I found myself nodding knowingly, mumbling “yep, seen that before”, thinking, “they've copied that from so and so”.

Nowhere is this trend more apparent than in iOS 9, whose every new feature, it seems, is borrowed from some other platform somewhere else – and that feeling hasn't abated yet, hours after first installing the developer preview on the office iPad Air 2 and iPhone 6.

Slide Over and Split View

Perhaps the biggest developments in iOS 9 – at least for iPad owners – are calques from Windows 8 of all places: the Slide Over and Split View modes.

As you may know by now, these two new views add for the very first time a way of displaying two apps on screen instead of one, and the gesture to access the view will be familiar to anyone who's used a touchscreen Windows 8 or 8.1 device: a simple swipe in from the right edge of the screen with a finger or thumb.

Those of the sinister persuasion will be disappointed that there's no left-handed mode, but it seems to work pretty well. The first time you pull out the Slide Over panel, you're presented with a list of enlarged app icons displayed against a rather stark grey background (surely Apple will improve the look before launch), which slides smoothly over the top of the app you're currently using. 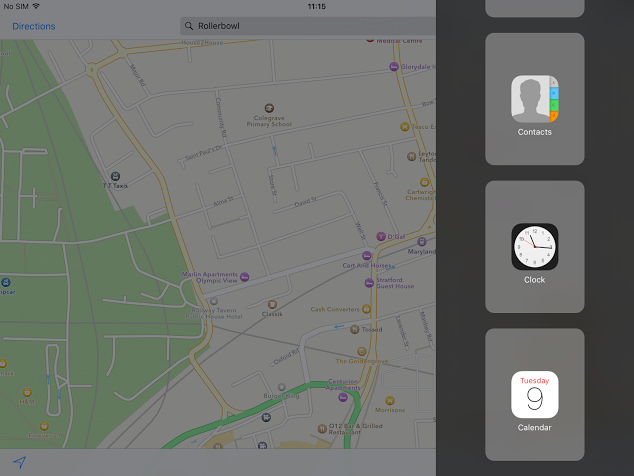 You can swipe up and down to browse the list, and tap to launch an app; what's displayed next is a compressed view of the selected app, which lies over the top of your current app in a narrow strip.

It's all pretty straightforward, even elegant: the apps you launch in the Slide Over panel can be used just like any app, making it a snip to, say, refer to and scroll through a web page while you're writing up some notes or an email. And once you've finished, it's a simple matter of tapping back on your initial app to tuck the panel away; either that, or pull down from the top to switch to another Slide Over app. Simple.

It's certainly a handy addition, but for iPad Air 2 owners, Apple is taking the feature even further. A fully functional Split View mode will allow you to run two apps side by side, flitting between them at will. In this view, the split becomes adjustable between 50:50 and 70:30 when you're holding the iPad in landscape view, depending on your needs.

All of which is undoubtedly useful, but these modes are pretty limited in their current form. Right now, non-Apple apps do not appear in the right-hand slide-over panel, and won't let you go into Split View either. Developers, it seems, will need to build in hooks to the Slide Over and Split View APIs before users will be able to use third-party apps with the system. I also hope Apple will eventually include Settings in the list of apps that can be displayed in the Slide Over panel, because it isn't available now.

These problems will almost certainly be fixed over time, but there are some inherent issues that may be more tricky to solve. Like how the new views are pushing use of the iPad, which has always been primarily a portrait device, towards a landscape-focused future. In portrait, neither Slide Over nor Split View looks particularly slick: the screen is split 60:40, and right now there's no way of adjusting it.

It also appears from the announcements Apple made at WWDC that video-based apps may not work in these modes either. Instead, Apple is borrowing Samsung's Pop up Play feature to enable multitasking for video – launching a picture-in-picture mode for apps such as FaceTime, so users can continue to view video while carrying out other tasks.

As yet, there appears to be no way for apps displayed in Split View to interact with each other, either. It isn't possible, for instance, to drag and drop images from the Photos app over to an email or a note; it seems plain daft to have to open an extra pop-up if you already have the Photos app open in a side panel. 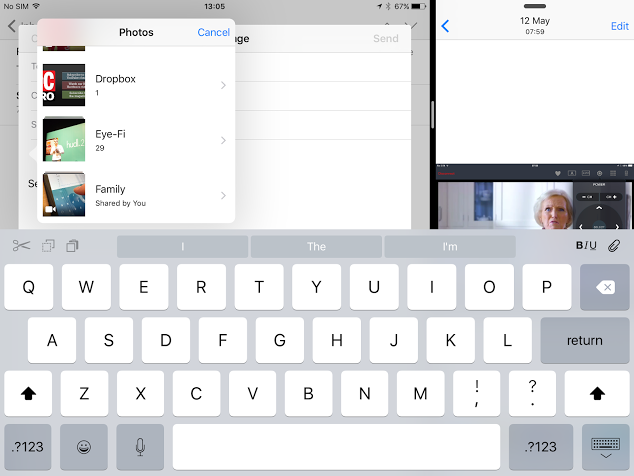 And neither is there an elegant method for switching the left-hand app in Split View. Currently, the only way to change this is to launch the gaudy new sideways-scrolling 3D recent apps view and select from there, which feels like a major kludge.