"GST and taxation and all that crap": small business election campaign kicks off 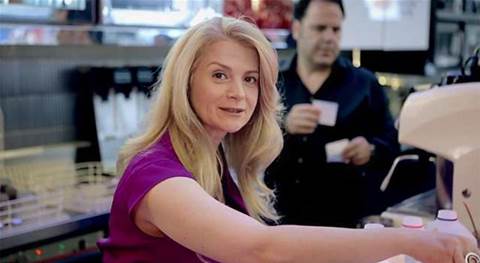 The seven million Australians who work in small businesses are being urged to make their grievances public on a new web site.

Hundreds of café workers around Australia have probably daydreamed about watching a politician attempt to use a chicken rotisserie - but few have done it like this, in a video on a web site linked to a national advertising campaign.

"I would gladly, gladly have any one of them spend a week in my shoes," says Angela Vithoulkas of Vivo Cafe in a video on the site. (Incidentally, Angela's web site also says she is a Councillor on the City of Sydney Council).

"Just imagine if they actually had to … go home at the end of the day smelling like a chicken rotisserie... and actually know what it's like... at the end of the month when you really don't know how you are going to pay all of your bills, including your overheads...."

Angela's complaints are part of the "Too big to ignore" web site, setup to encourage other small business operators to air their grievances about things like red-tape, taxes and government costs in the lead-up to the federal election this year.

"GST and taxation and all that crap," is high on the agenda, according to one participant in the official web site video. Others cite concerns like:

The federal election is a "rare opportunity" to "stand up and make a big noise", according to the campaign organisers. The central theme, according to the web site, is that small business is "overtaxed, overregulated and overlooked".

The campaign will also involve advertisements on TV and radio. The Australian Chamber of Commerce and Industry is behind the campaign.