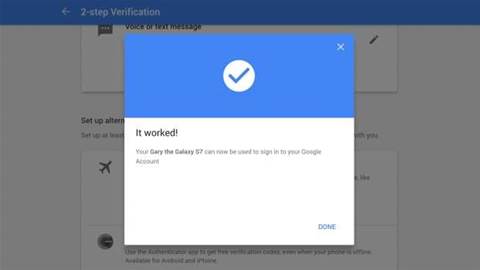 No more SMS or email codes – you can now sign into Google sites with one phone tap.

Two-factor authentication is strongly recommended by security experts for all systems, applications and cloud services that support it. But while it may be necessary, it sure is unwieldy.

You sign in on a computer, get a text message or email with a code that you have to manually type out, and only then can you log in.

Yes, it makes it that bit harder for you to be hacked, as it means the hacker needs access to at least two of your devices or passwords, but it's fiddly enough that most people just can't be bothered until it's too late.

Google has had a stab at making things simpler with a feature called Google Prompt, and it's actually really good.

Because pretty much everyone has a smartphone and the vast majority of them are using iOS or Android, Google reckons that linking your account to your handset is safe enough. If you try to log-in to Gmail on a new PC, your phone will get a prompt asking you if it's okay. Just say that it is, and you're good to go. No unwieldy entry of numbers or text: just a single tap.

Google only lets you do this if you have a lock screen on your phone, and it requires either Android or an iPhone 5S or later. You have to opt-in to the system to get it working, and here's how.

1. Head to the Security section of your Google account.

3. A new option called “Google Prompt” should be there. Select it

4. Select your phone from the drop down box (most people will only have one, but just to be safe)

5. Google will send a test prompt to confirm. Select “yes” on your phone when it comes through and you're good to go!

Of course, this won't solve all your two-factor authentication problems in one go. Any sites that aren't Google will still require you to do things the old fashioned way, but given Google has an awful lot of services that people use, it's a good one to start out with.