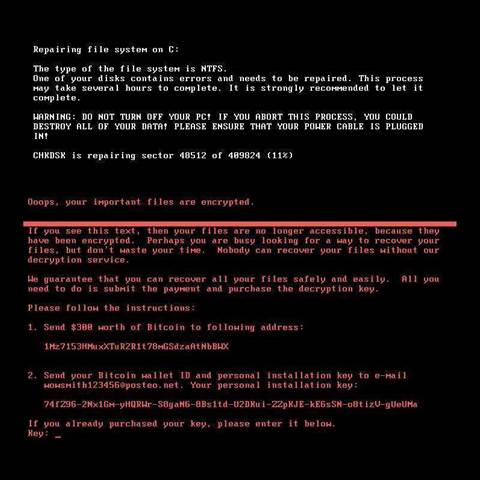 With Cadbury's Tasmanian factory joining the many other global victims, we remind you how to protect your systems.

The new ransomware outbreak, which is bringing down systems around the globe, has hit Australia. The ABC reported that systems at the Cadbury chocolate factory in Tasmania have been shut down by the ransomware.

Ransomware attack comes to Tasmania. This is what Cadbury's Hobart computers look like since 9:30pm #ransomware pic.twitter.com/tZIC16oQNH

The ransomware, which has been given various names including GoldenEye, Petya and NotPetya, is reported to demand US$300 worth of the Bitcoin to unencrypt a computer's files.

According to iTnews, the attack has taken out servers at Russia's biggest oil company, disrupted operations at Ukrainian banks, and shut down computers at multinational shipping and advertising firms.

The attacks follow the recent WannaCry outbreak, which infected over 300,000 computers in 150 countries, including at least 12 Australian small businesses, including, most recently, red light and speed cameras across Victoria.

Symantec, Avira‏ and others have said the new ransomware is a variant of Petya, which apparently uses the same Windows vulnerability used by WannaCry – a vulnerability that Microsoft released a security update for months ago.

The #Petya #ransomware is back using the #EternalBlue exploit - and our #Antivirus customers are protected! #infosec pic.twitter.com/fWap1rRLeA

Kaspersky Lab said its preliminary findings suggest it’s not a Petya variant, but “a new ransomware that has not been seen before”, dubbing it “NotPetya” – but the company agreed it used the same vulnerability. Kaspersky also reported that its telemetry data indicates around 2,000 users have been attacked so far.

Organisations in Europe appear to have borne the brunt of the outbreak so far, although reports from elsewhere are starting to appear.

IT systems in several WPP companies have been affected by a suspected cyber attack. We are taking appropriate measures & will update asap.

Law firm DLA Piper in the US:

A tipster sends along this photo taken outside DLA Piper's D.C. office around 10am. #Petya pic.twitter.com/HWS4UFlvQR

We’ll update this story as more details come to hand.