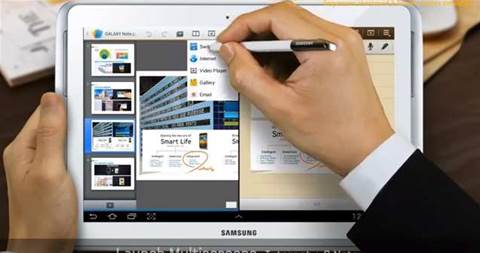 Using your finger to navigate around a tablet screen is one thing, but what if you could do it with a pen? The Samsung Galaxy Note 10.1 could potentially be a useful business tool.

The Galaxy Note was one of those products  that sits in a niche between smartphones and tablets. At 5-inches, the screen is large enough for viewing content but too small for serious creation. Although it feels a little big for a phone it fills the gap between different categories.

Although BIT recently speculated on whether it was worth waiting for the Galaxy Note 2 Samsung has jumped in and capitalised on the good name of the Note with the Galaxy Note 10.1. Samsung has released the new Galaxy Note 10.1 for sale in Germany and the United Arab Emirates. There is no news on an Australian release yet.
We're wondering if this is part of Samsung's strategy to distance itself from the iPad as a result of its bitter court case over patent infringement. By using the "Note" moniker and using the S-Pen - a stylus - Samsung has put a product in the market that obviously competes with the iPad but differentiates itself.
Newsletter Signup

I have read and accept the privacy policy and terms and conditions and by submitting my email address I agree to receive the Business IT newsletter and receive special offers on behalf of Business IT, nextmedia and its valued partners. We will not share your details with third parties.
The Note 10.1 is similar to the Galaxy Tab 2 10.1 but sees a performance improvement and the addition of Samsung software to use the S Pen for writing on the screen, annotating documents and editing images. This further separates the Note from the iPad and addresses one of the main criticisms of the iPad for business users.
The price is around €480 making it over €100 cheaper than the iPad in Europe. There's no word yet on local availability and pricing.
Copyright © BIT (Business IT). All rights reserved.
Tags:
101 galaxy hardware note pen stylus tablets
By Anthony Caruana
Aug 7 2012
5:22PM