Gadgets: A pen that scans documents 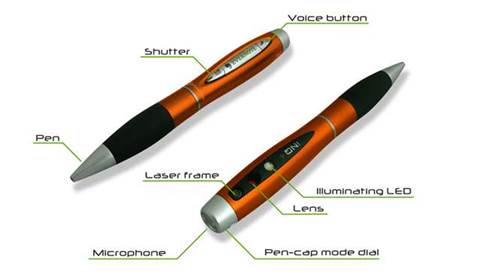 NoteMark is a pen with a still camera designed to 'scan' documents - which can be anything from a business card through a page of handwritten notes to a whiteboard.

We've previously mentioned the Livescribe Echo self-digitising pen, and there's a more recent model (the Livescribe Sky) that automatically syncs your notes to Evernote via Wi-Fi.
The NoteMark pen takes a different approach to a similar end.
Newsletter Signup

I have read and accept the privacy policy and terms and conditions and by submitting my email address I agree to receive the Business IT newsletter and receive special offers on behalf of Business IT, nextmedia and its valued partners. We will not share your details with third parties.
Where a Livescribe pen uses a built-in video camera in conjunction with specially printed paper to digitise as you write or draw (which also allows synchronisation between notes and audio recordings), NoteMark is a pen with a still camera designed to 'scan' documents - which can be anything from a business card through a page of handwritten notes to a whiteboard.
Rather than using a conventional viewfinder, NoteMark includes a laser that frames the area to be captured. Image resolution is 2048 by 1536 pixels. NoteMark also includes a voice recorder.
NoteMark is a USB device, so its image and audio files can easily be copied onto a computer or other device that works with USB storage (including an iPad via the iPad Camera USB Connection Kit). From there, the files can be synced with an Evernote account for access on a variety of devices.
Without having tried it out, it's not possible to say whether a NoteMark is really any better or easier to use than a smartphone for capturing documents or recording meetings or classes.
Canada based NoteMark does not appear to sell directly to end users, nor are we aware of any local stockists. But a Google search reveals multiple suppliers with prices mostly in the $90-$100 range for a single unit including delivery to Australia.
Copyright © BIT (Business IT). All rights reserved.
Tags:
hardware notemark pen scan
By Daniel James
Feb 5 2013
12:18PM