From two guys in a garage, to this 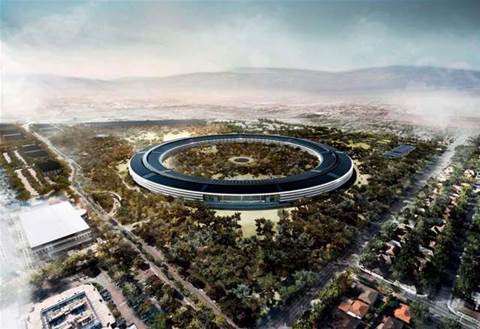 Apple's latest update to its UFO-like design for its headquarters are...impressive.

So those of you with visions of future large-scale success can look at the latest renderings of Apple's proposed headquarters and think "One day..."

Designed by Foster + Partners (as in Norman Foster), the main building is a giant ring - thought by some to resemble a UFO - set in more than 40 hectares (100 acres) of landscaping that "will recall Cupertino's pre-agricultural and agricultural past", according to Apple's submission to the City of Cupertino.

Apple this month submitted a revised proposal to the city, slightly relocating the 1,000-seat auditorium, and providing more parking spaces and a larger landscaped area. A proposed footbridge over a creek has been removed from the plans.

The high proportion of landscaping largely results from the proposed provision of underground and multi-storey car parks in place of traditional surface parking.
Newsletter Signup

I have read and accept the privacy policy and terms and conditions and by submitting my email address I agree to receive the Business IT newsletter and receive special offers on behalf of Business IT, nextmedia and its valued partners. We will not share your details with third parties.
The plan also includes space for up to 12,000 employees, a combination of energy efficiency and on-site renewable energy generation, and the use of rainwater and recycled water where possible.
If approval is granted, Apple expects construction to be completed by mid-2016.
In August, Apple became the most valuable company ever - though like movie box office records, that didn't allow for inflation.
Interesting to think that back in the mid-seventies it was just two guys in a garage.
Copyright © BIT (Business IT). All rights reserved.
Tags:
apple cupertino headquarters ufo
By Daniel James
Nov 26 2012
12:42PM