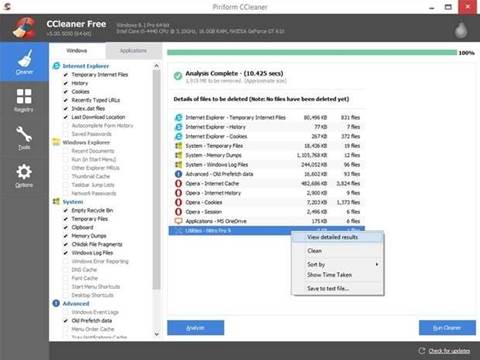 CCleaner is without doubt the world’s most popular system cleaning tool for Windows. The developer, Piriform Software, claims the software has been downloaded 1.5 billion times!

For those who haven’t used it, CCleaner is a free tool that makes it easy to clear traces of your web browsing activities (such as online forms); optimise Windows by cleaning up the registry; reduce boot time by disabling unnecessary startup programs; and reclaim disk space by removing unused files (such as those in the Recycle Bin). The latter is particularly useful given the recent trend to using low-capacity solid state drives in laptops.

Now Piriform has released a new version, CCleaner 5.19, as well as CCleaner 5.19 Portable, which can run on a USB drive.

Users of the Professional edition users gain a better System Monitoring tool. The update is rounded off with minor – and unspecified – interface tweaks and bug fixes.

CCleaner 5.19 and CCleaner 5.19 Portable are available as freeware downloads for PCs running Windows XP or later. Two commercial versions, Professional and Professional Plus, are also available, offering additional features such as real-time monitoring and file recovery.