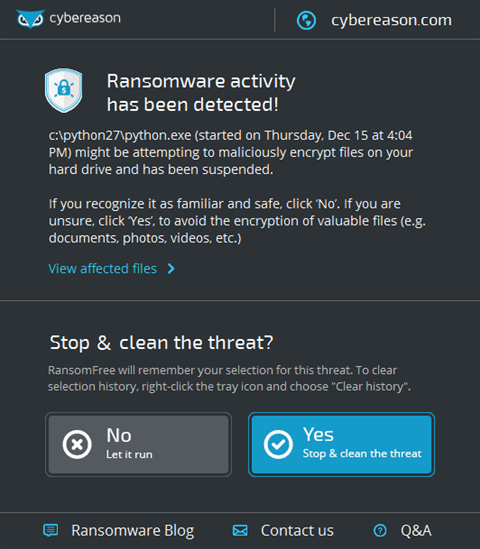 RansomFree can help protect your PC’s files with an algorithm for detecting ransomware-like behaviours.

Cybereason has released RansomFree, a free Windows anti-ransomware tool that uses behaviour monitoring to watch your system for ransomware-like actions, detecting and suspending any malicious process once encryption starts.

RansomFree is exceptionally easy to install and use. There are no setup options, no scheduling tools, no lists of drives or folders: you just install the program and leave it to do its work.

RansomFree is a true “set and forget” tool. You can read an “About” box, but that’s essentially it.

Presumably these dummy files are intended to act as a buffer: ransomware encrypts them first, giving RansomFree time to detect what’s going on before any real files are lost.

Cybereason says RansomFree’s detection algorithm is based on analysis of more than 40 ransomware strains, and a very quick first test suggests it will block most of the major threats.

How long this protection will last is difficult to say. We suspect ransomware authors will quickly find ways to detect, disable or bypass RansomFree entirely. But even if that happened, and Cybereason never update the program again, it’ll still offer capable protection against older threats, and that’s more than enough to justify the download.

RansomFree is available now for Windows 7 and later.