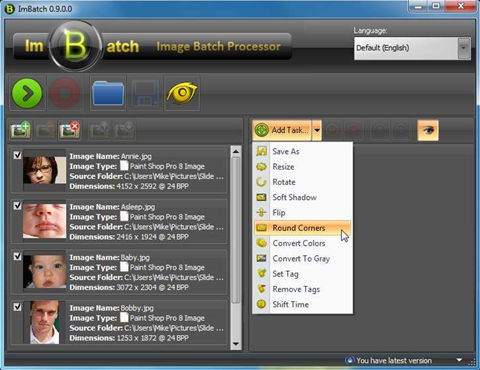 The latest version of ImBatch gets some handy new tools for adding a transparent background, among other things.

An image editor can do some remarkable things with photos, but if you don’t have the time or skill to use one, a batch image processing tool can save you a lot of hassle. And whether you’re a professional photographer or an amateur with holiday snaps, the ability to process multiple images in a single operation can be a huge time-saver.

The latest version, ImBatch 4.90, includes some handy new tools. A new Stroke feature, for example, outlines your image with transparency, using a customisable width and colour.

ImBatch can now replace transparency with a white colour when saving to an image which doesn’t support transparency (say, when converting from PNG to JPG).

The ‘Convert Colors’ task now has a related option to replace an alpha channel with the specified colour, and a bug fix ensures transparency is now saved correctly to DDS files.

Elsewhere, the ‘Resize Canvas’ task has gained an option to fill the expanded space with a blurred and enlarged version of the source image. This won’t work for every situation – or even most situations, probably – but the results can look great and it’s not a feature you’ll often find in other tools.

The ImageMonitor’s ‘totally silent mode’ is the other highlight for us. Turn this on and ImBatch can watch your target folders and automatically process images as they arrive, without any audio or popup alerts.

ImBatch 4.90 runs on Windows XP or later. It’s free for personal use and around $40 for a commercial licence.