The latest release of the Apple subsidiary's custom application development system is designed to be even easier to use.

Over the last several months FileMaker has been promoting the way its software tool puts custom app development for Windows, Mac, iOS and the web within the reach of small businesses.

The company provided a series of three ebooks describing the process (Plan, Create and Deploy) and a survey showing the benefits businesses had received from implementing custom apps.

FileMaker 15 aims to make the job even easier by providing four more 'starter solutions' (contacts, inventory, content management and tasks) that are simpler and more easily understood by complete beginners.

"We believe these are really going to make a difference," said FileMaker consulting engineer David Head. "There are a lot of myths around about how hard it is to get started with custom apps."

The new version – priced from $1085 – also allows custom mobile apps to take advantage of more iOS features including Touch ID (fingerprint log in), 3D Touch (quicker access to specific apps), iBeacon (location-based functions driven by Bluetooth beacons) and the ability to interoperate with other apps (such as Dropbox for cloud-based file storage).

The WebDirect feature has been enhanced in FileMaker 15 to provide a better experience when users access FileMaker apps from a smartphone's web browser.

Other improvements include multiple undos in the script editor, compatibility with additional SQL databases, and security and performance enhancements. 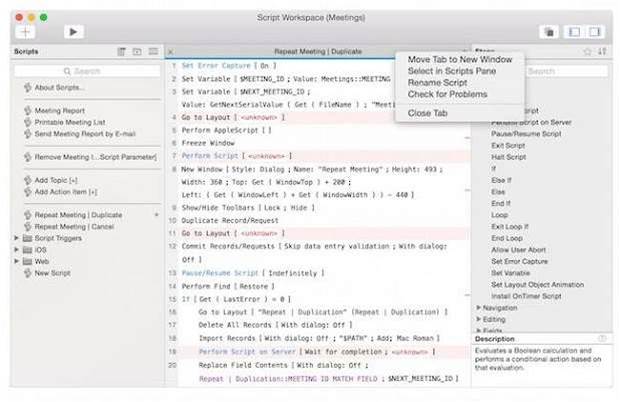