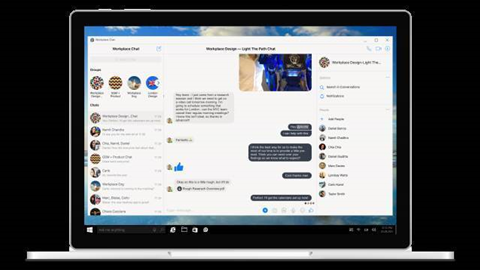 More than 30,000 organisations have signed up to the Facebook's Workplace collaboration tool since its launch last year, the company has revealed – more than double the number announced just six months ago.

Coinciding with the news, and to celebrate the app's one year anniversary, Facebook has also announced the release of a Workplace desktop app for group chats, which will eventually support video calls in an update due to land in the coming weeks.

Facebook's answer to highly successful collaboration applications such as Slack, Atlassian and a host of smaller tools, was first revealed in October 2016, and has since taken a sizeable chunk of the market, despite its relatively late arrival. Although it's some way off rivalling the biggest names in the industry, such as Slack with its 4 million daily users, it's an impressive accomplishment for a new collaboration app.

Alongside some new features, such as screen sharing and the upcoming group video chat support for up to 50 people per conference call, Facebook has also given its existing mobile app a new coat of paint, simplifying its interface to give it a consistent look across desktop and mobile.

“Messaging has always been a key component of the Workplace experience. But we wanted to make it even easier for people to work together in real-time, both on the go and at their desks.”

The new desktop version of the chat app, which was already available to mobile users, includes file sharing and screen sharing, both of which will prove immensely useful to business users. Message reactions, @mentions, and gifs, which will be familiar to Slack users, are also included.

There were concerns that Facebook Workplace would be a difficult sell. Companies have struggled to distance their employees from personal social media use, and some voices suggested that the application would too closely resemble its parent platform.

However, customers have clearly resonated with its familiar feel and the fact that it looks and feels almost identical to the consumer Facebook app, with the company banking on users being able to pick it up almost immediately.

Both Facebook and Microsoft are considered the newest players in the collaboration market, despite dwarfing rival companies in terms of size. Microsoft Teams is now bundled as part of Office 365, granting it access to a user base of over 85 million, although it's unclear exactly how many customers are using the app.

The Facebook Workplace app is available immediately for Windows and Mac, as well as iOS and Android.