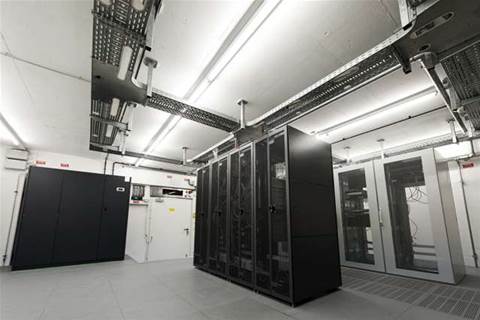 The government is proposing new legislation that would force telecommunications companies to store phone and internet data for two years, a move supported by intelligence agency ASIO. It is also preparing to deliver long-awaited amendments to the Privacy Act that will place some restrictions on the customer data Australian companies can store in offshore data centres.

Macquarie Telecom’s $60 million data centre, located in the Sydney suburb of North Ryde, has been granted ISO 27001 certification, critical for meeting the cyber-security requirements of its major government clients.

But experts say while more and more large data centres are popping up around Australia, it’s doubtful whether Australia could ever be leader in cloud hosting, as was proposed by Macquarie Telecom last year.

“You have to question why this would be a photo opp for the PM,” said Mark Gregory, senior lecturer in electrical and computer engineering at RMIT.

“After all, it’s just a data centre.”

Bruce Arnold, lecturer in law at the University of Canberra, said Australia is running five years behind Europe on data privacy issues.

“We have one set of rules for finance, so lending and credit ratings; somewhere sitting alongside we have other rules about consumer behaviour and tracking what people are doing online; we have another set of rules in terms of national security and policing – data retention; and very separately health data and offshoring health data.”

At the heart of the issue, Mr Arnold said, was the issue of consent.

“In a liberal democratic state we should be free to hand over data, but we should do it on an informed basis. There should be true consent.”

He added that in a global data environment in was inevitable data would go offshore.

A Senate committee has been granted an extension until Tuesday after the Coalition moved to support banks and telecommunications companies objecting to proposed restrictions on offshoring credit-history related customer data.

He added that whereas in the US where large data centre providers have gained direct access to green power sources including wind and solar, the situation was dramatically different in Australia.

Dr Gregory said unless there was a huge expansion of available bandwidth, or a major reduction in electricity costs, Australia was unlikely to become a data centre leader.

However he said there was an expectation that Australian businesses store customer data in Australia.

Mr Arnold said businesses needed to regard themselves as custodians of data rather than data owners.

“Good Australian businesses will probably flourish when they offshore data because they’ll have strict management of what happens in their offshore operations, and when the data goes offshore they will have alerted customers.”