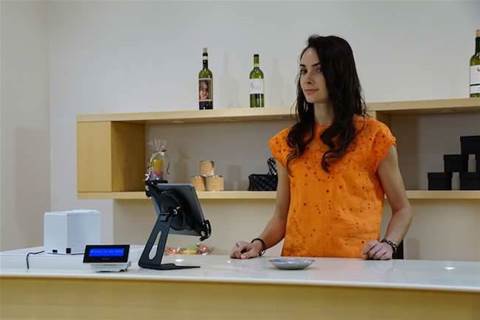 Recognising the growing use of tablet-based POS systems by retailers and hospitality businesses, Epson has released a receipt printer designed for this market.

The Epson TM-m30 is a receipt printer designed with iOS and Android tablet-based POS systems in mind.

It is able to print from web applications without the need for special software, and pairing the printer with the mobile device is simplified through the use of NFC - if the tablet or other device is NFC-enabled, touching it to the TM-m30 is enough to establish the connection.

One TM-m30 can be shared by multiple tablets.

The printer - which comes in either black or white - can be used in more traditional environments thanks to USB, Ethernet and Wi-Fi interfaces.

Prices start at $379, and other features include horizontal or vertical mounting, greyscale output (not just black and white), barcode and graphic printing capability, and a maximum paper width of 80mm.

Extra-cost options shown in the photo include a customer display (people are used to being able to see what they're being asked to pay, not just hearing the salesperson tell them) and a matching tablet stand. There's also an optional wall mount.