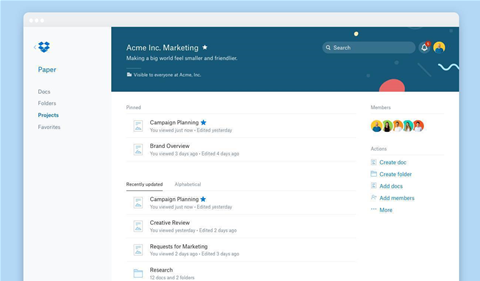 Its new Paper and Smart Sync tools allow business users to work on documents at the same time and select which files to download.

Dropbox has formally launched two features that were previously in beta, and revamped its pricing structure.

The beta of Dropbox Paper arrived last year as a way to allow more than one person to work on a document at the same time. Since then, more than two million Paper documents have been created, according to the online storage company.

Paper (pictured above) is now officially out of beta and Dropbox has added several features to the collaboration tool, including:

Dropbox Smart Sync (previously codenamed Project Infinite) addresses the problem faced by many business users of Dropbox: the total size of shared files can exceed the amount of space available on an individual computer.

Smart Sync shows all of the shared files and folders in Windows Explorer or the macOS Finder, whether they are on the computer or just in the cloud. All a user needs to do is open a file as usual, and it will be automatically downloaded if there isn't already a local copy. And if there's a need to free up storage space, files and folders can be put back to cloud-only by right-clicking. 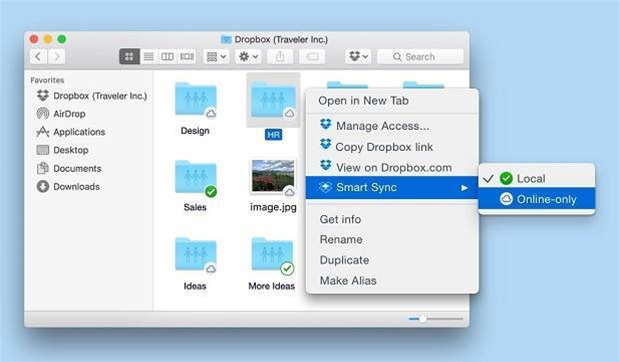 Smart Sync is available on all business plans, and Dropbox is considering extending it to personal customers.

Dropbox's web interface has been improved, and the new viewer info feature reveals who has viewed shared files and when. This feature can be disabled on a file-by-file basis.

Along with these changes, Dropbox has split its business plan into standard ($17.50 per user per month for 2TB of storage) and advanced ($27.50).

The advanced plan provides all-you-can-eat storage, phone support during business hours, and certain additional admin capabilities, including control over the number of devices that can be synced, the ability to sign in as any user in the team, and single sign-on integration.

Enterprise plans (you'll have to ask for a quote) go even further on the admin front, with the ability to integrate with certain enterprise mobility management products, control which Dropbox accounts can be used on the corporate network, and force users to migrate to the team account. Round the clock phone support is available, as well as advanced training for end users and admins.