Does Mark Zuckerberg put tape over his webcam? 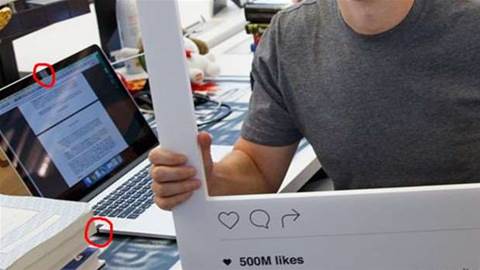 Poor smiley Mark Zuckerberg. The Facebook CEO put out a picture recently of himself holding an oversized Instagram frame – to celebrate 500 million monthly active users – and all people seem to want to talk about is how he's paranoid.

If you look closely at the picture, you'll notice that the laptop at his desk has tape covering both its camera and microphone – a pretty low-cost way to stop hackers that may be able to seize control of his computer from seeing or hearing anything.

Some may doubt that the picture is of Zuckerberg's desk. He is the CEO, after all. Shouldn't he be perched on some type of iron throne made from hundreds of smelted Like icons? As Gizmodo points out, however, a Facebook live video posted nine months ago shows the same desk. Note the wooden Facebook sign and custom 'Zuck' matt, which can be seen in the Instagram photo.

Zuckerberg isn't the only high-profile individual who may put tape over his webcam. Earlier this year FBI director James Comey admitted to putting tape over his laptop's camera.

Comey would know about the potential for hackers to take control of a laptop's camera. The FBI has used malware to do exactly this to spy on targets.

As for Zuckerberg, his security measures don't begin and end with a piece of tape. In April 2016 Facebook disclosed in a regulatory filing that it has spent over $12 million between 2013 and 2015 protecting Zuckerberg and his family, following “specific threats” to the company's CEO.