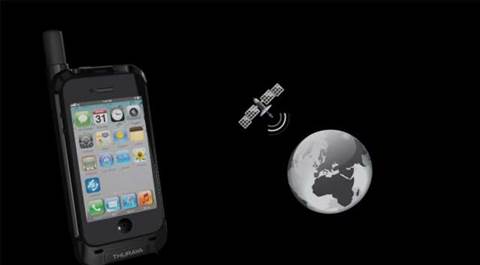 Dick Smith are now selling "SatSleeve", an accessory that attaches to your existing iPhone and turns it into a satellite phone.

If you regularly travel to remote parts of the country, you can often find yourself on the wrong side of network coverage.

There are satellite phones available from providers such as Telstra which will give you a substantial boost in coverage but this also means having to carry around an extra phone.

Dick Smith are now selling "SatSleeve", an accessory that attaches to your existing iPhone and turns it into a satellite phone.

Here is a video that demonstrates how the accessory works:

According to Dick Smith, the SatSleeve accessory provides "100% coverage Australia wide", though it's worth bearing in mind that satellite phones require line-of-sight with the satellite which can be broken by obstacles such as steep hills and forest.

The SatSleeve will also provide data in addition to SMS and phone calling capability so you could theoretically use your data-chugging apps stored on your iPhone while out in the middle of nowhere.

At $899 for the hardware, on top of a subscription plan, it's not cheap - the upfront cost for the SatSleeve is more than double the cost of what you would typically pay for a dedicated satellite phone.

SatSleeve is only currently available for the iPhone 4 but Android and iPhone 5 versions are also planned for release in the near future.