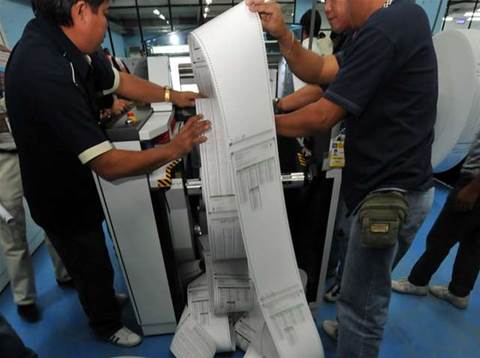 That involves a lot of swearing, we'd argue. Technology is getting better, but apparently some things never change.

Printers are faster, better quality and offer more features than ever, but there's one thing that never changes - fixing a paper jam is incredibly annoying.

Why can't things just work? A press release landed in our inbox recently from Dick Smith, claiming that "Office workers waste two weeks a year on paper jams". Ouch.
The press release cites a study of office workers and small business owners. The study suggests that technical problems such as paper jams and crashing computers are a significant cause of wasted time at work (no big surprise there).
Newsletter Signup

I have read and accept the privacy policy and terms and conditions and by submitting my email address I agree to receive the Business IT newsletter and receive special offers on behalf of Business IT, nextmedia and its valued partners. We will not share your details with third parties.
We're not exactly treating the figures from the Dick Smith Productivity Study as gospel (what was that about lies, damned lies and statistics?) given there were just 503 respondents and no information about whether it was a properly constructed sample, but it does worry us that people are still facing the same old problems.
I mean, was there ever a time that photocopiers and printers didn't suffer occasional paper jams? That said, buying branded paper, riffling it before loading, and taking care when putting the paper into the tray seems to go a long way towards avoiding the problem.
The real issue tends to be the difficulty of clearing a jam when it does occur - once the sheet is torn, it can be a challenge to free all the pieces.
Another frequently cited tech problem was said to be having to rework a document after a computer crashes. Well folks, that's why they invented auto-save.
Having said that, your correspondent must admit to losing a couple of hours work recently because he failed to promptly save a new document - on the system concerned, auto-save doesn't kick in until the document has been saved for the first time. So save early and save often!
Copyright © BIT (Business IT). All rights reserved.
Tags:
hardware jam paper printers
By Daniel James
May 14 2013
11:37AM