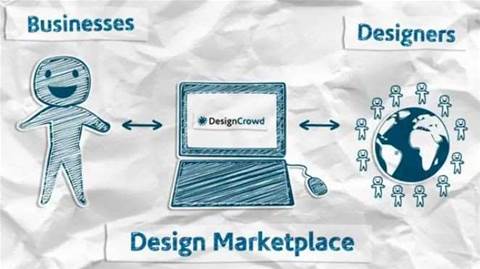 While 'offshoring' often conjures visions of call centres in the Philippines or coding factories in India, a number of small businesses have taken to outsourcing projects through crowdsourcing services such as DesignCrowd and Freelancer.

One of the features of these services is that they are mostly international in nature - BIT has published an account of a real-life DesignCrowd project - and while you might want someone with English language skills approaching that of a native speaker to act as your virtual assistant, that's not really a consideration if you're looking for an artist or a graphic designer.

Except that potential bidders for the work do need to be able to understand your brief.

So DesignCrowd has added a translation tool to its site so that design briefs for logos, website design, poster design, icon design and so on can be read in German, Spanish, French, Hindi or Portuguese.

Adam Arbolino, co-founder and CTO of DesignCrowd, said "We are looking to take further steps with the internationalisation of DesignCrowd by building in more language support tools and translated pages across the site."

Just bear in mind that the cumulative result of decisions to have work such as a cafe menu redesign done overseas could be that the graphic designer working around the corner might not be able to buy lunch from the cafe as often. The downward pressure on rates could mean she instead eats a home-made sandwich every day. The florist in the same shopping strip misses out on selling the fresh bunch of flowers that used to grace the designer's studio each week. Our designer can no longer afford the local bookkeeping service, so she turns to Freelancer and finds one in the Philippines. As other clients are similarly affected the florist and the bookkeeper start looking for ways to reduce their expenditure, and the downward cycle continues.