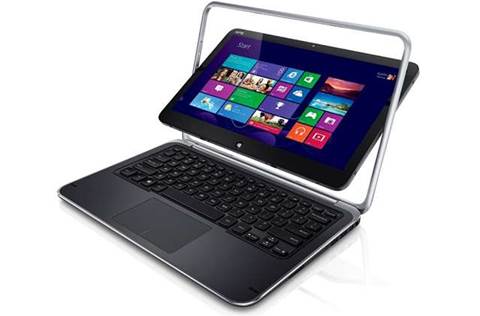 We're less than a couple of weeks away from the official launch of Windows 8 and Dell has joined the brands announcing new lineups of desktops, laptops and tablets.

We previously reported on the new Dell Windows 8 tablet. Now we're seeing more info overseas including priced for the Dell desktop and laptop option for Windows 8.

This article at ZDnet details the new machines. While Australian prices haven't been announced, we do know that Dell will be adding an edition to its XPS range with a 27in desktop. According to the ZDnet article, this $1,600 all-in-one has a 2,560x1,440 resolution  with an Intel Core i5 Ivy Bridge processor. While the specs aren't going to excite power users, the big screen will fit in nicely in most home offices. To us, it seems to take some design cues from Apple's iMac.

The laptop range delivers the most interesting models with the XPS 12 Convertible Touch Ultrabook (image at top of article). ZDnet reports that the 12.1in display can convert from a 12in laptop into a touchscreen tablet. The specs, are solid if not spectacular, with the key being a solid state drive (128GB). The laptop has an Intel Core i5 Ivy Bridge processor.
Newsletter Signup

I have read and accept the privacy policy and terms and conditions and by submitting my email address I agree to receive the Business IT newsletter and receive special offers on behalf of Business IT, nextmedia and its valued partners. We will not share your details with third parties.
Read more about the pros and cons of Windows 8 for your business here.
Copyright © BIT (Business IT). All rights reserved.
Tags:
12 dell hardware windows 8 xps
By Anthony Caruana
Oct 16 2012
4:30PM