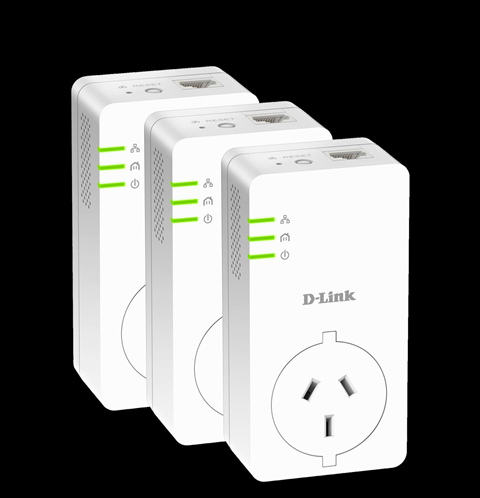 The DHP-P601AV offers network speeds of up to 1Gbps via your electrical wiring.

PowerLine adaptors essentially send an Ethernet 'signal' through a building's electrical wiring. This is a convenient approach if you need to place an Ethernet-only device away from existing network points and you don't want a cable trailing around the office, or where your Wi-Fi network doesn't reach part of the premises and you prefer not to use a Wi-Fi extender. In the latter case, you'd connect one PowerLine adaptor to the wired network, and an access point (or a router configured to work as an access point) to the other adaptor.

In most cases a better way is to get an electrician in to run additional Ethernet cables through the building, but that's not cheap and it isn't appropriate for temporary situations.

The HomePlug standards for PowerLine adaptors cover a range of speeds, and like other networking vendors D-Link offers a range of products with different specifications.

The latest addition to the D-Link PowerLine family is the DHP-P601AV PowerLine AV2 1000 HD Gigabit Passthrough Kit, promising speeds of "up to 1000Mbps."

As with Wi-Fi and broadband there are several factors affecting the actual speeds achievable over PowerLine, so the actual throughput is likely to be a lot lower than 1000Mbps. According to the HomePlug Alliance, the real-world performance of AV2 SISO (single input, single output) adaptors like the DHP-P601AV is such that throughput between 50 and 180Mbps can be expected from most outlets, while speeds in excess of 180Mbps are common in some outlets. We haven't tested the DHP-P601AV so we can't comment.

'Passthrough' in the product name means that the adaptor includes a power socket, so you don't lose a power point the way you do with PowerLine adaptors that lack this feature. Plugging a PowerLine adaptor into a powerboard, double adaptor or extension cable is likely to reduce its performance, so a passthrough socket is often a valuable feature.