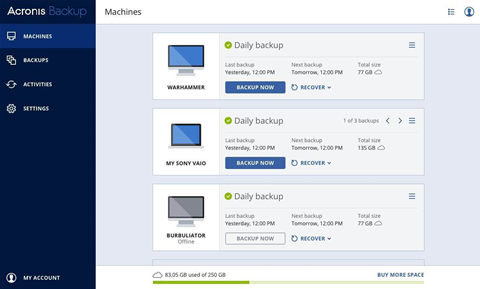 The domain registrar is offering its customers a range of Acronis-powered cloud backup plans.

We've previously reported on the way Acronis cloud backup is available directly from the company or via its partners.

Crazy Domains is now one of those partners, offering a series of backup plans to suit most pockets.

For those who only need to protect a few key files, 1GB of backup storage is available at no cost.

If you have a lot of data to protect, there are five further plans topping out at $1,269 for 10TB.

One reason why such high-end plans are available is because one account can be used to back up multiple computers and devices. Windows, macOS, iOS and Android are all supported.

Data is encrypted before being sent to the server, and to save space and conserve bandwidth only the changes made to a previously backed-up file are transmitted.

The software is not limited to backing up to the cloud – local backups to directly attached or networked disks are also supported – and estore options allow the recovery of one file, multiple files or a complete system.