Could your café, boutique, design firm do with a touchscreen computer? 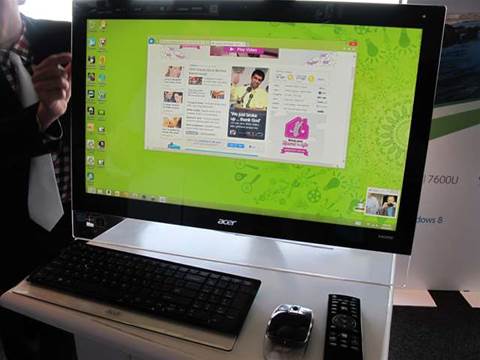 While watching Acer show off its large Aspire 7600U touchscreen Windows 8 computer today, we couldn't help but wonder who might use one.

Remember Microsoft's touch-sensitive table? It was called the Surface (now it's called PixelSense), and it's a table that acts like a gigantic touchscreen. The idea is that you put it in your place of business and customers can crowd around it to look at interactive brochures, videos, anything else related to what you’re selling.

The PixelSense is an interesting idea, and apparently made it into some upscale restaurants, hotels, banks and the like, but last time we checked it cost more than $10,000.

But what if you could do something similar for a couple of thousand dollars? Touchscreen PCs have been around for a few years now, but they're about to get a lot better with the arrival of new models with Windows 8. 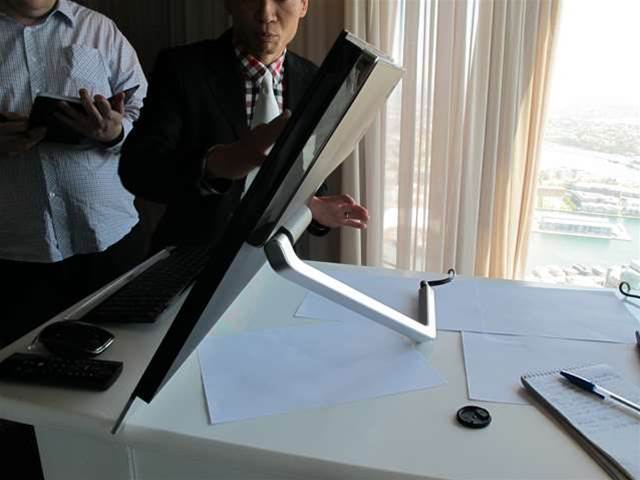 Push the screen and the Acer lays down on an angle, so it's easier to see from above.
Newsletter Signup

We looked at one today - Acer's new Aspire 7600U, which starts at $2,299 - and came away thinking about who might actually use one. HP, ASUS and Dell are also among the brands with all-in-one touchscreen computers.

It strikes me that a computer like this might be useful for big ticket purchases in a shop where a: there are lots of options for the customer to choose from or b: customer's make their choice based on a visual preference.

Of course, there's also the iPad, but it's a much smaller screen and won't run Windows programs.

Take a business selling house shutters. You sit your customer down in front of the computer and they pick their choice of style from a catalogue on the screen. The catalogue could show what different configurations look like, and with different colours against different background colours for the house. Architects, landscapers, possibly even travel agents all strike us as places where there might be potential for touchscreen computers.

That's the theory. We're sure these business owners would be able to tell us if we're off the mark. We're putting in requests to the all-in-one touchscreen computer brands to see if they're willing to put us in touch with some of their users.

Done right, we wonder if this might leave the customer feeling happier that they've been able to oversee and take part in a complex transaction. Sometimes it can be off-putting not to be able to see the screen while a salesperson works out all the details. It might give the customer some peace of mind to be able to sit with the salesperson in front of a screen, or at least a screen that you're both looking down on.

On the other hand, we could also imagine this being a major frustration if the software isn't up to scratch or designed smartly.

Having to swipe around a screen to customise a coffee order would be a pain, we'd argue. We've also been at a McDonald's in Sydney with a computer system that let customers select and customise their orders. We got the feeling that placing an order took a lot longer that way - the temptation to check all the options slowed things down.

For a business that wants to really make a slick experience at the point of sale though, a full size touchscreen offers interesting potential if used in the right way.

Copyright © BIT (Business IT). All rights reserved.
Tags:
7600u acer all in one allinone aspire hardware touchscreen windows 8
By William Maher
Oct 19 2012
5:26PM