Come fly with me, but not with your phone 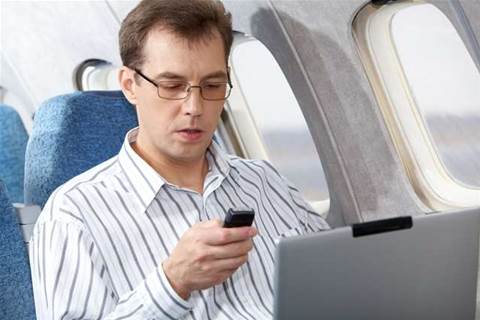 Jon Honeyball questions whether mobile phones can really be a major risk factor on plane flights.

I fly quite a lot. I confess it’s something that I actually enjoy now that I have the option to decide where I will sit in the plane. Years ago, I used to go on foreign press trips every month or so, and I would find myself squashed into the middle row at the back of a 747, usually right near the toilets. A more unpleasant place would be hard to imagine, especially in those dim, dark days when smoking was still permitted on long-haul flights.
However, it would have been churlish to complain. If Microsoft or another vendor was picking up the cost of a ticket to fly the international press to its event, there were no rules that said it had to be comfortable.
Newsletter Signup

I have read and accept the privacy policy and terms and conditions and by submitting my email address I agree to receive the Business IT newsletter and receive special offers on behalf of Business IT, nextmedia and its valued partners. We will not share your details with third parties.
As I’ve grown older, my ability to go on trips has been greatly curtailed. Due to the pressure of work, it has become impossible to drop everything at the last minute to go on a foreign trip with only a week’s notice. Too many clients, too much to do, and much more forward planning required. This is why I’m glad I can afford to choose which events I attend, fly myself out there – usually seated towards the front of the plane – and pay to enter the conference as a normal attendee.
I find it more interesting and rewarding to attend the sessions than to sit down for a press-group roundtable with another marketing person who doesn’t really understand the product at hand.
When flying, there’s inevitably an instruction about turning off your phone because, apparently, it might affect the plane’s systems, causing it to crash and its passengers to burn in a horrible manner. Don’t get me wrong, I’m absolutely of the opinion that having a matching number of landings to takeoffs counts as a significant success. And that jumping out of a perfectly serviceable aircraft makes you rather weird. But that’s just me.
When I’m sitting there, I’d really quite like to get to my destination in one piece, and I fully understand the reticence about anything that might unduly raise the risk profile.
However, the reality is that mobile phones can’t be a major risk factor on a flight. If you think about it, there will always be phones that are simply left switched on by mistake on long-haul flights. I’ve done it myself, and felt embarrassed to have my phone ring as we come into land. But given there are some 400 people on a 747-400 plane, a percentage of them must forget on every flight. Gauging the numbers isn’t easy; maybe it’s 1%, 2% or even 10% who genuinely forget. Some, of course, will do it just out of spite and self-importance.
If you take the excellent BA001 flight from London City to New York, you’ll discover the in-flight cellphone service. I admit that there are only 32 seats on the plane, but again, cellphone interference can’t be an issue. Indeed, I don’t see any valid reason to keep phones switched off, other than that of politeness and the desire not to intrude on the quiet space of other passengers.
So imagine my surprise to learn that QANTAS and American Airlines have approved the iPad for use as electronic document stores for their planes. It will save the pilots from carrying a whole pile of paperwork with them onto the flight, and I assume it will be easier to keep up to date too. It isn’t clear if these are 3G iPads, or merely Wi-Fi models, and whether they’ll have “flight mode” turned on. But even so, the presence of an electronic device within inches of the sensitive equipment must give one pause for thought about the magnitude of the real problem.
I also understand from friends who fly helicopters and light aircraft that using a mobile phone in flight is common practice. Indeed, a quick web search will find all sorts of devices for interfacing your mobile phone with the headsets.
Some people have suggested that the next excuse to be trotted out by the airlines is that a mobile phone could represent a risk in the cabin if there’s turbulence, or that it might fly out of your hand and hit someone. Well, the same is surely true of the bottle of wine sitting on my tray, and the hardback book by my side.
Personally, I hope the use of phones on flights continues to be banned. Air travel is a haven of peace and quiet. Time to read a Kindle (although not during takeoff or landing), or catch up on movies on my iPad. Airlines are even starting to hand out iPads for entertainment. I don’t need to tweet from 35,000ft, fun though it might be the first few times. I don’t need to read emails either, and I certainly don’t want to make phone calls.
[This article was also published in PC & Tech Authority magazine]
Copyright © Alphr, Dennis Publishing
Tags:
flight mode phone plane
By Jon Honeyball
Dec 10 2012
1:37PM