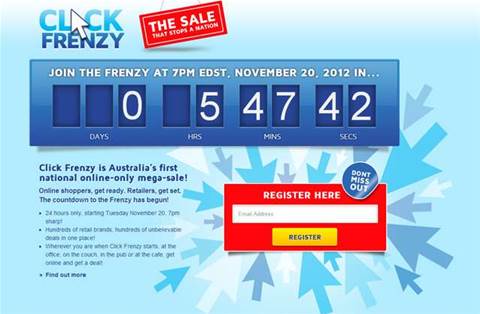 While it might be tempting to start clicking on supposed bargains during tonight's Click Frenzy online shopping promotion, we urge a little caution.

If you're looking for some new gear for the office then get ready for Click Frenzy - an online shopping "event" (we're not sure when shopping reached the same status as a concert but let's go with it).

You'll need to register for Click Frenzy but once that's done, you'll be able to access a series of one-off deals from lots of different retailers from 7pm tonight. Exactly what though, we're not sure, as the sale items won't appear till then.

There's an impressive list of retailers involved with most of the major computer makers represented, Microsoft and a number of electrical retailers as well such as Bing Lee and Dick Smith Electronics.

That said, you can shop in haste but repent at leisure. We needed a new, basic PC last week and found that one major manufacturer was already heavily discounting items.

While it might be tempting to start clicking on supposed bargains, we'd urge a little caution.

Shop around before committing. If you know what you're after before the offers start tonight then get some competitive pricing so you know whether you're really getting a bargain.