Chromebook: Pros and cons of this $299 laptop 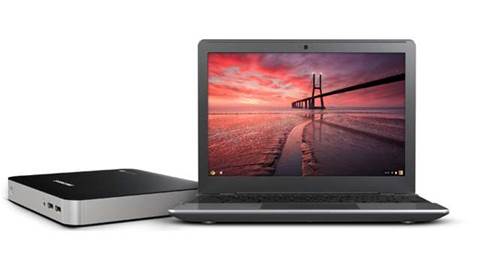 The first Chromebooks from Acer and Samsung have just gone on sale in Australia. So how are these laptops different?

Chromebooks aren't exactly our first recommendation for the workplace.

But they are cheap, and because the first Chromebooks from Acer and Samsung have just gone on sale in Australia you might hear about them.
Here is a quick summary of what a Chromebook is and what it can do:
Newsletter Signup

I have read and accept the privacy policy and terms and conditions and by submitting my email address I agree to receive the Business IT newsletter and receive special offers on behalf of Business IT, nextmedia and its valued partners. We will not share your details with third parties.
A Chromebook is a cheap and light laptop using Google operating system, named Chrome OS. It doesn’t run a Windows or Mac operating system.
There are two of these Chromebooks now being sold in Australia:
The big advantages of Chromebooks, according to Google, are:
On the other hand, you are limited to using apps that work with a Chromebook.
The limitations of a Chromebook
This means that you are restricted to using Google’s Chrome web browser, video chat using Google Hangouts, Google Docs as your word processor (not Microsoft Word) and Picasa as your basic photo manager and editor.
You won’t find alternative applications like Skype, Photoshop or Office on the Chrome OS.
Also, third party applications are limited to whatever is available in the Chrome Web store which are essentially web based applications that you access and use via the Chrome Web browser.
This also means that you need to be connected online to use the apps, though certain applications such as Google Docs and Google Drive can be used offline as well.
If you do need to run other software, Google does say you can use a remote desktop function to access software on another computer.
So what would you use the Acer's hard drive for? This could be handy if you want to quickly transfer files across from other storage devices and not have to worry about having an internet connection to access those files.
You can also still look at files stored on your hard drive or an external hard drive.
Conclusion
You can run these free Google apps on any laptop. So why would you buy a Chromebook?
The underlying limitations of the Chrome OS are the reasons why Google is positioning Chromebooks as a cheap secondary device as opposed to a replacement for your main workstation or laptop.
If you’re happy working in Google Drive to edit documents, and you just need a cheap and light laptop to browse the web, send emails and create documents, than a Chromebook could be a viable option.
It might also be handy if you have a staff member that struggles with computers and needs something very simple. But remember, it has a small screen.
If you need to use more complex applications, and prefer to work with a bigger screen, then we'd recommend a Windows computer or a Mac. After all you can still run all your Google Apps on a regular Windows machine.
Both the Acer and Samsung are available for purchase at Harvey Norman and JB Hi-Fi stores and Google is throwing in 100GB of Google Drive storage for the next two years for anyone that picks up a Chromebook.
Copyright © BIT (Business IT). All rights reserved.
Tags:
acer chromebook hardware samsung
By Krishan Sharma
Staff Writers
Mar 20 2013
2:18PM