Canon's Maxify: not industrial strength, but more durable than a home printer 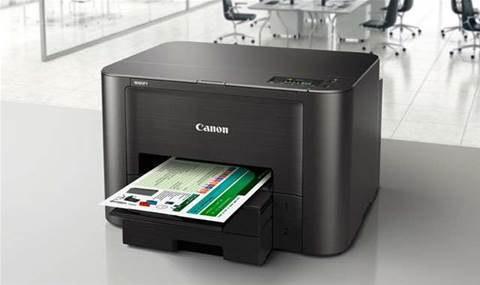 If your print volumes don't justify an 'industrial strength' printer but you need something more durable than a home printer, Canon's new Maxify family may fit the bill.

The Maxify range also includes some of the cost-control measures we've previously only seen on more expensive printers and multifunctions, including the ability to restrict access to certain features, such as requiring a password before colour copies can be made.

First a refresher: using a low-cost inkjet printer or multifunction device in your small business can be a false economy if you use it more heavily than the manufacturer's expectation of home use.

If your print volumes don't justify an 'industrial strength' printer but you need something more durable than a home printer, Canon's new Maxify family may fit the bill. These devices are available exclusively from Bing Lee and Officeworks until February 2015, but will be stocked more widely thereafter.

Various time-saving features are included, including up to 23 images per minute in black and white (at least one of the Maxifys supports automatic double-sided printing) or up to 15 ipm in colour, with the first page out in as little as seven seconds.

Jobs to be printed can be sent from computers or mobile devices (AirPrint is supported for iPad and iPhone users, among other protocols), or collected from cloud storage such as Dropbox, Evernote, Google Drive and OneDrive.

The new range is the first to use Canon's new Dual Resistant High Density ink, said to combine water, friction and marker resistance with low cost per page.

All the multifunction models feature a scanner with an automatic sheet feeder with a capacity of 50 sheets, plus the ability to scan directly to the cloud or to email. The top-end MB5360 multifunction is also able to scan both sides of a page in a single pass. Canon didn't mention prices, and the $348 MB5360 was the only one of the five already listed on either of the retailers' web sites.