Can a drone help promote your business? 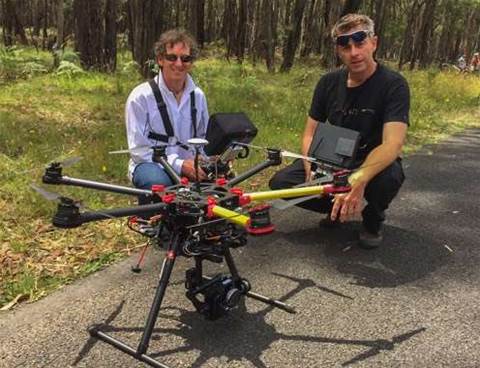 Businesses are increasingly using photos and videos shot from drones – and in some surprising ways.

BIT spoke to Darren Eger, director of professional drone operator CineBird, to find out how the technology is being used by small businesses.

One of the more obvious uses is to shoot photos and videos for real estate marketing. While a camera atop a tall pole can give a reasonable bird's eye view, a completely mobile platform offers greater flexibility.

But Eger says drones are being used in many other ways.

Asset management companies are engaging drone services to carry out remote inspections of the outsides of tall buildings such as apartment blocks, avoiding the need to send people into relatively hazardous situations such as rooftops unless problems have been detected.

Similarly, an initial inspection of the outside of a structure such as a silo or chimney no longer requires an abseiler, roof-mounted plant (such as air conditioners) can be catalogued from the ground, and storm-damaged assets can be surveyed more quickly than was previously possible.

Promotional videos can be given a new twist at modest cost. One example is Philip Lobley Wines in the Yea Valley. "We saw a story in what he does", Eger says, and produced a video to explain why Philip Lobley isn't “just another winery”.

CineBird started in the film and television business, with its drones providing an option with more flexibility than ground cameras but without the high cost of helicopters or light aircraft. However, that affordability meant creative people soon came up with other applications where the premise is "don't tell me, show me".

A small landscaping and earthmoving company engaged CineBird to shoot aerial video footage showcasing its projects; a property developer wanted to show the actual view from apartments in a proposed building; and farmers have commissioned an aerial video survey to show how a grant had been used to return part of the property to native wetland.

CineBird has also worked with conservation groups such as the National Trust to help develop a video catalogue of the structures under their care. Eger pointed out that it is possible to create a 3D model from a series of aerial photos. This example is of an old brick works in the Melbourne suburb of Box Hill:

It’s not just used for outdoor images either. CineBird has carried out indoor projects such as photographing the ballroom at Melbourne's Flinders Street Station.

Aerial photography isn't limited to conventional cameras. Multi-spectral cameras pick up ultraviolet and infrared, and can be used to detect the state and health of crops in a field, or heat leaking from poorly insulated parts of buildings, for example.

Many of CineBird's projects have come about by talking to people – including small business operators – about the problems they have and then thinking about how the technology can be applied to solve them.

"We can see lots of opportunities if we can show companies the benefits."

It could be an opportune time to investigate the possibilities for your business, because as iTnews recently reported, Australia’s Civil Aviation Safety Authority (CASA) has relaxed its legislation for some drones.

Just make sure you deal with a reputable operator who fully understands and complies with the rules – and who has the resources and skills to deliver an outstanding result.