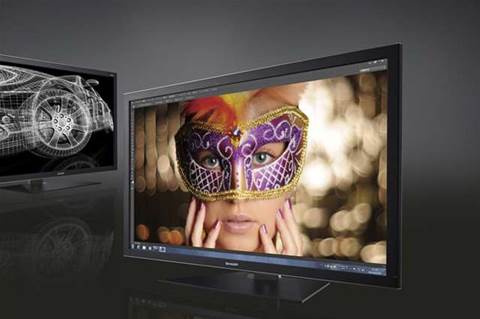 Work with graphics? Sharp has announced availability of this big, extremely high resolution monitor for sale in Australia this month.

An ultra-high definition display is overkill - and even inappropriate - for the average small business user, but can be extremely valuable for certain activities such as CAD, graphics and video editing.
Sharp's new PN-K321 is a 31.5in widescreen monitor with a resolution of 3840 by 2160 pixels, four times as many as HD, which is 1920 by 1080 - hence the 'quad full high definition' label.
Newsletter Signup

I have read and accept the privacy policy and terms and conditions and by submitting my email address I agree to receive the Business IT newsletter and receive special offers on behalf of Business IT, nextmedia and its valued partners. We will not share your details with third parties.
The PN-K321 provides a lot of screen real estate in situations that can take advantage of it and justify the $6,800 price tag, possibly including the playback of 4K UHD video content.
The BBC has started making programs in 4K and Japan is planning to start 4K broadcasts next year - just keep in mind that the PN-K321 is a monitor, not a TV.
Other features of the unit include landscape and portrait orientation, DisplayPort and HDMI interfaces (allowing a single cable to a computer for video and audio) and 2+2W speakers.
The IZGO (indium gallium zinc oxide) technology co-developed by Sharp has allowed the company to build an edge-lit LCD backlit screen that's just 35mm deep. Excluding the stand, the display weighs 7.5kg.
So why is this monitor inappropriate for general use? At around 140 pixels per inch standard interface elements such as menus may be too small for comfort, especially for those with less than perfect vision.
Adjusting Windows scaling may give better results than adjusting the graphics adaptor's resolution, but the quality of the image will depend on the software developer making appropriate provision for this feature and in any case effectively wastes some or all of the extra screen resolution.
Copyright © BIT (Business IT). All rights reserved.
Tags:
4k big cad design display hardware hd high definition monitor pnk321 screen sharp ultra video editing
By Daniel James
Mar 5 2013
5:28PM