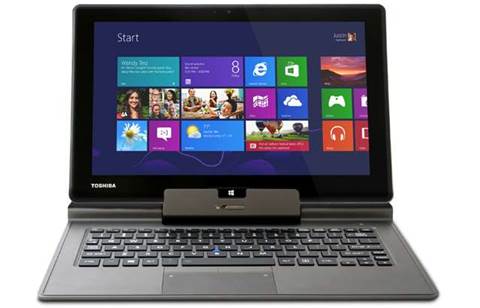 Linked gallery: Photos of Toshiba's new laptop and tablet in one, the Portege Z10t

A key feature is the Portege Z10t has a screen which actually detaches from the keyboard, like the Lenovo ThinkPad Helix we looked at recently. Click to see the price.

Lately we've been adding more reviews and articles about so-called "hybrid" laptops - or laptops that convert into tablet computers.

Now another hybrid has been unveiled, this time by Toshiba.

Toshiba's entry into the convertible laptop/tablet market is the Portégé Z10t.

You get a couple of options depending on whether you want low cost or high power.

Intel's specifications for what makes an Ultrabook an Ultrabook remain in place, which means the Z10t is stuck with Intel HD graphics, but there are processor options:

Like the Lenovo Thinkpad Helix you get a 11.6" Full HD screen. Popping the keyboard in gives you additional HDMI and USB 2.0 ports, while the tablet portion has micro HDMI, RGB, LAN and a single USB 3.0 port.

Toshiba touts the Z10t as being "thin and light" at 16.9mm on the front and 19.9mm, but we note they haven't disclosed the crucial total weight of the unit.

With the Lenovo ThinkPad Helix weighing in at 835g, Toshiba may have to do some crucial cutting to make it stand out.

Also keep in mind, if it's a Windows 8 tablet you are after, Microsoft's Surface Pro goes on sale next month (May) in Australia. Click here to read about it.

Is a hybrid right for you? Our guide to hybrids looks at the pros and cons (weight is one downside). Click here to read it.