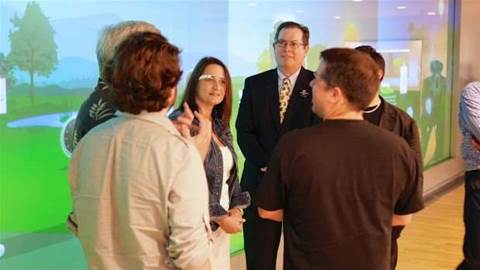 Beecham Research estimates that the enterprise market for wearables and AR can reach $1.1b by 2020

If you're feeling underwhelmed by wearables and augmented reality right now, a new report from Beecham Research suggests you may just be looking in the wrong place. It will be businesses and not consumers that drive innovation in the worlds of AR and wearables, the research argues.

The report states that the greatest opportunities for growth lie in the manufacturing, logistics, healthcare and retail sectors. While augmented reality currently only has limited use for consumers, we are already seeing more valuable applications in the workplace, such as heads-up displays for complicated production processes and as a source of urgent data for surgeons to prevent them getting distracted when it really counts.

“Current human-computer interfaces in mobile computing are primarily based around touchscreens, but AR, along with wearable technology, offers a hands-free computing environment enabling greater interaction with information and the user's surroundings,” argues Saverio Romeo, principal analyst at Beecham Research.

“We expect to see rapid evolution of smart glasses, with more miniaturisation, better field of view and battery life, while there will also be increasing attention on the convergence with virtual reality technology and the Internet of Things to deliver competitive advantage. Collaboration with AR/VR and IoT players will be crucial.”

We saw first hand a number of ways the Internet of Things could be used for business use in San Francisco last year, and it's undeniable the potential is great, despite much of the focus being placed on consumer usage.

As for VR and wearables though, Beecham Research is predicting big things. Market analyst Matthew Duke-Woolley said of the report, “It is clear that the overall status of the enterprise market for AR and wearable technology is at a tipping point, moving from trials and test-bed projects to real commercial deployments.”

“While it is still questionable to provide a firm forecast, if this speed of transition accelerates as companies quickly recognise the benefits and return on investment, we believe the market can reach just under US $800m by 2020.”

That's around $1.1bn to you or me, so decent numbers. If correct, hopefully much of the innovation that we see in businesses in the future will ensure similar outside-the-box thinking for consumers in the years that follow.

I have read and accept the privacy policy and terms and conditions and by submitting my email address I agree to receive the Business IT newsletter and receive special offers on behalf of Business IT, nextmedia and its valued partners. We will not share your details with third parties.
Copyright © Alphr, Dennis Publishing
Tags:
ar augmented reality beecham research microsoft saverio romeo the enterprise market virtual reality technology wearable technology
By a Staff Writer
Jan 22 2016
12:20AM