Brother has a new range of business inkjet printers 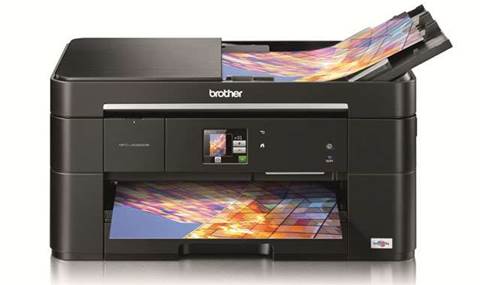 These new Brother multifunction printers could be cheaper than your local copy shop for short runs.

With ink costs as low as 2.3c per page when using high-capacity cartridges, the Brother  MFC-J5320DW ($229) and MFC-J5720DW ($299) multifunction printers shouldn't break the bank - even when you add the cost of paper, that still could be cheaper than your local copy shop for short runs.

Like most current inkjets aimed at the business market, they use separate cartridges for each colour to cut wastage, and the 'ink save mode' further reduces consumption.

And if you're one of those people who worries about vampire power (the amount of electricity consumed by devices that are switched off but still plugged into the mains), these multifunctions draw just 0.04W in that state.

What else do these models have going for them? They take up to A3 paper, with duplex (double-sided) printing on A4. Nominal print speed is a respectable 22ppm in black or 20ppm in colour, and the automatic document feed is a big timesaver when copying, scanning or faxing multi-page documents. The MFC-J5720DW has two feed trays, which is handy if you routinely use two different sizes or type of paper or other media such as envelopes.

The other main differences are that the MFC-J5720DW has a faster fax modem, scans both sides of the page in one pass, and a larger touchscreen.

There's a good range of connectivity for both models: USB, Ethernet and Wi-Fi, including Wi-Fi Direct support so mobile devices can talk directly to the multifunction without going through a router. AirPrint (for iOS) and Google Cloud Print (for Android) are both supported, and there's integration with Flickr, Google Drive, Evernote, Dropbox, OneDrive and other online services.

We haven't had an opportunity to use either model yet, but on paper (pun intended) they seem worthy of consideration if you're looking for an A3 inkjet multifunction.