Brother creates another way to print on the move 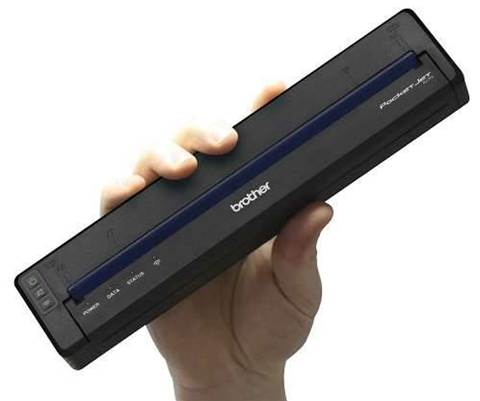 While it's becoming increasingly acceptable for tradies and other mobile workers to send invoices, receipts, quotes and related documents by email, there are still times when the customer wants some traditional paperwork.

Brother has introduced a new family of mobile printers, the PocketJet 7 series.

Like the company's previous models - including the PJ-673, introduced a couple of years ago - the PocketJet 7 series use thermal printing technology.

This means they only work with special thermal paper, but there's no need for ink, toner or ribbons. The downside is that the resulting prints are less durable than those produced using other technologies, as exposure to various environmental factors such as heat, UV light and plastics can cause the image to fade - but that's more of a problem for your customers than you.

Brother offers two grades of thermal paper. One costs $19 for 100 A4 sheets and has a rated archive life of three years, the other costs $24 for 100 sheets and is said to be good for 20 years. Continuous and perforated rolls are also available.

The rechargeable battery is rated for 600 pages per charge. A mains charger is included, and two types of car adaptor are available as optional extras ($49 each) along with other accessories including drop-resistant cases ($39-$99), a carrying case ($19), and a car mount ($199).

At 8ppm, they aren't particularly fast but that shouldn't be an issue if all you're printing are receipts and invoices.

There are six models, ranging from the $599 PJ-722 to the $879 PJ-773 and PJ-763MFi. The PJ-773 is the most flexible, including support for AirPrint, Google Cloud Print, Mopria and other printing schemes via its Wi-Fi and USB interfaces. Other models require the use of Brother's app for printing from iOS or Android devices.

You should be able to see the specs of the PocketJet 7 series models on Brother Australia's web site but at the time of writing it had not been updated for this new range.