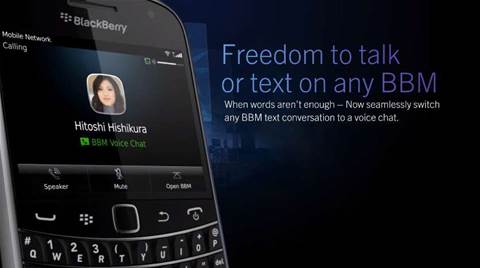 Who doesn't like cheaper, or even free, phone calls? A new free update for BlackBerry will let you make free voice calls to your BBM contacts over Wi-Fi.

If you have a Blackberry you might want to take a look at the free update BlackBerry Messenger (BBM) version 7. You can download BBM 7 here.

This free update for BlackBerry devices running Version 6 or later of the BlackBerry OS allow you to make free voice calls to your BBM contacts over a Wi-Fi connection. An update for older BlackBerry Version 5 will come next year.

Unlike the voice apps on other smartphones there’s a split-screen feature so you can check other BBM text chats, check email, or navigate to other apps while you are on a BBM Voice call.

You can see when contacts are available for a voice call and use their accessories such as a Bluetooth or wired headset, or the BlackBerry smartphone’s speakerphone.

I have read and accept the privacy policy and terms and conditions and by submitting my email address I agree to receive the Business IT newsletter and receive special offers on behalf of Business IT, nextmedia and its valued partners. We will not share your details with third parties.
Copyright © BIT (Business IT). All rights reserved.
Tags:
7 bbm bbm7 blackberry calls free messenger services software wifi
By Anthony Caruana
Dec 12 2012
10:24AM