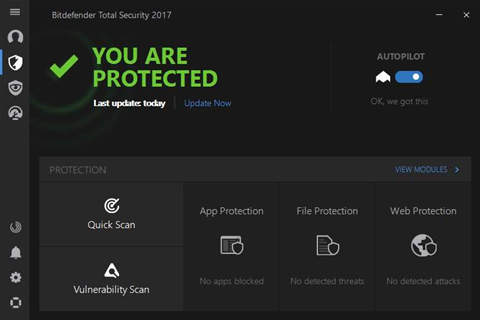 New features in all three products include the Wi-Fi Security Advisor, a one-click tool which lists local wireless networks and quickly highlights any vulnerabilities.

Enhanced ransomware protection enables you to store your most valuable files in special folders, only accessible to trusted applications.

Bitdefender Internet Security and Bitdefender Total Security Multi-Device also offer parental controls and a firewall, both of which have been improved in the latest version.

In addition, the Multi-Device suite’s anti-theft tools include a new Bitdefender Central option to remotely take photos from any of your Windows or Android devices, helping you track them down.

While it’s not a major upgrade, Bitdefender’s core engine remains a solid and reliable product with among the best detection rates around.

There’s also a Mac version that includes Time Machine Protection that blocks unauthorised access to your backups, ensuring you can recover your system from any attack.