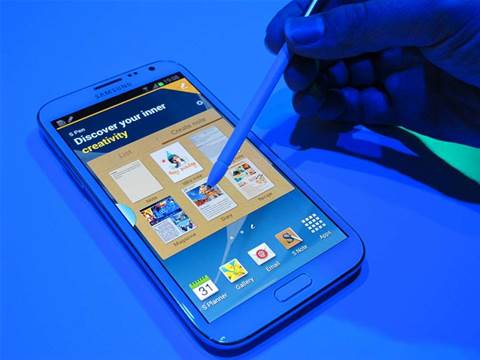 Take a lot of photos? Want to write on your phone? Samsung has announced the launch of the Samsung GALAXY Note II in Australia.

Samsung has announced the launch of the Samsung GALAXY Note II in Australia.

The GALAXY Note II sits right in the middle of the tablet and smartphone form factors.

The screen is a 5.5in (141mm) with a 16:9 aspect ratio which makes it a decent size for watching movies while travelling. It runs version 4.1 (also known as Jelly Bean) of Google’s Android mobile operating system.

Unlike many other smartphones and tablet, the GALAXY Note II comes with Samsung’s new S Pen so you write on the screen. Samsung claims that it feels like writing with a pen and paper – a claim we look forward to testing in the coming weeks.

Like many devices, it’s hard to know whether it’s a tablet/phone that takes photos or a camera that makes calls.

The GALAXY Note II comes with an 8 Megapixel rear-facing camera supporting HD video recording and a 1.9 megapixel front-facing camera for video-conferencing on the go.

The GALAXY Note II comes preloaded with Navigon, a turn-by-turn voice-guided navigation app so there aren’t any data charges apply for using navigation. It includes free map updates are available every 3 months for two years.

The GALAXY Note II will be available in either marble white and titanium grey from $899 RRP outright (for 16GB) from next week.

Pricing and plans for the Samsung GALAXY Note II are available through Optus, Vodafone and Telstra.

You can also pre-order the Samsung GALAXY Note II from the Samsung Experience Store at 450 George Street, Sydney.