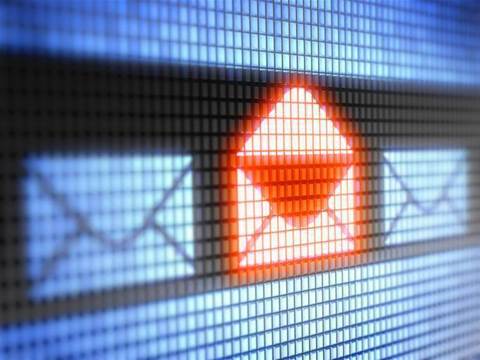 The latest scam email campaign reported by MailGuard is designed to steal your credit card details.

“The scam message tells the recipient that Netflix ‘failed to validate’ their payment and that they need to log into their Netflix account to ‘verify’ their ‘billing and payment details’,” MailGuard reports.

The email creates a sense of urgency by warning the recipient that “failure to complete the validation process” will result in their Netflix account being cancelled.

Clicking the ‘verification’ link in the email takes the victim to a phishing website set up to look like a real Netflix login page, which prompts the user for their email address and Netflix password, and then sends them to a page that harvests their credit card details. 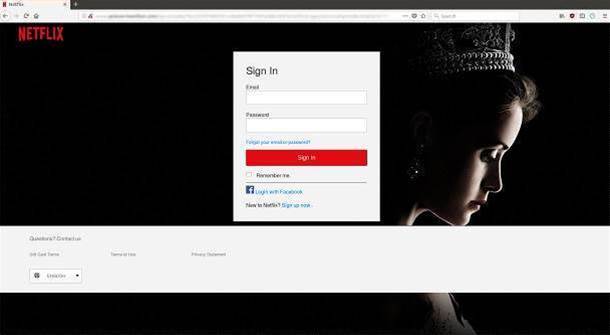 “This scam has been very well executed with high quality graphical elements in the email message and phishing page, so it’s easy to imagine that it could potentially trick a lot of unsuspecting people,” MailGuard warns.

Fake emails that masquerade as trusted brands are now a very common trick used by scammers. They’re often quite realistic, so it’s advisable to take measures to protect your devices and your business:

Here are some previous reports from earlier this year.

27 March 2018: MailGuard has warned of a phishing campaign of fake emails purporting to be Origin Energy invoice notifications. The email contains a ‘view bill’ link button which, MailGuard suspected, linked to a file containing some type malware. 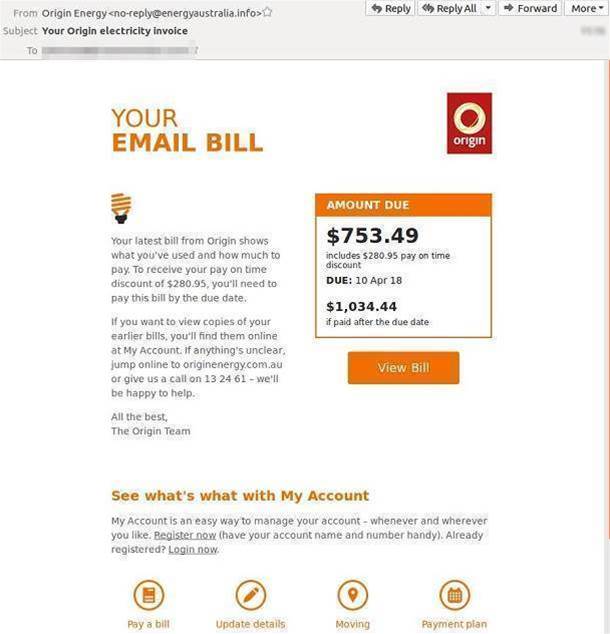 An example of the fake Origin email. Picture courtesy of MailGuard.

“This is a well-designed scam message,” MailGuard commented. “The criminals behind this attack have gone to the trouble of registering four new domains and using them as email sender domains to make their emails look more legitimate.”

22 March 2018: MailGuard has warned of a phishing campaign of fake emails purporting to be invoices. The emails are designed to look like invoice notifications sent through the Xero accounting platform from one of a number of real businesses. The emails use fake ‘Xero’ domains in the sender addresses.

An example of a fake Xero email. Picture courtesy of MailGuard.

7 March 2018: MailGuard has warned of a phishing campaign of fake emails purporting to be invoices. The emails are designed to look like invoice notifications sent through the MYOB accounting platform from one of a range of businesses.

The emails contain a link which directs the victim to ‘view invoice’, but instead downloads a file containing hidden malware.

19 March 2018: MailGuard has warned of a scam campaign of fake Apple notification emails that aims to steal victims’ Apple IDs and passwords.

The bogus email claims the recipient’s Apple account has been locked for security reasons, and clicking on ‘unlock Apple ID’ takes them to a phishing page designed to look like an Apple ID sign-in portal. The aim is to harvest victims’ login credentials as they sign into the fake portal.

“This attack has the potential to affect a lot of people and could result in financial losses and significant harm to computer systems,” MailGuard commented.

22 March 2018: MailGuard has warned of a phishing campaign of fake emails purporting to be invoices. The emails are designed to look like invoice notifications sent through the QuickBooks accounting platform from one of a range of businesses.

The emails contain a ‘view invoice’ button which, if clicked, is likely to download a file containing malware. 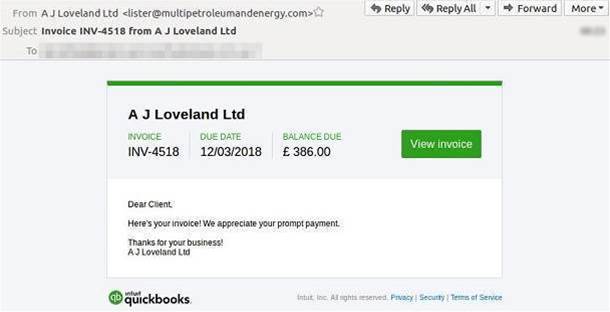 An example of a fake QuickBooks email. Picture courtesy of MailGuard.

“This email scam is quite well designed and is exploiting Quickbooks branding to convince victims that it an authentic notification email,” MailGuard commented.

8 March 2018: MailGuard has warned of a malicious campaign of fake emails that exploit Vodafone, Telstra and Bigpond brands. The emails appear to be delivering a ‘wire transfer receipt’ as a .pdf attachment, but the file contains malicious code that is activated if the file is opened.

The emails are sent from a number of email addresses with the Vodafone, Telstra and Bigpond domains.

2 March 2018: MailGuard has warned of a scam campaign of fake Dropbox notification emails that aims to steal your Dropbox credentials.

The sample email isn't very convincing: the sender's address is highly suspicious (Dr()p-B()x!!), the recipient isn't addressed by name, there are a number of typos in the body of the message, and the overall style doesn't match the format used by Dropbox. 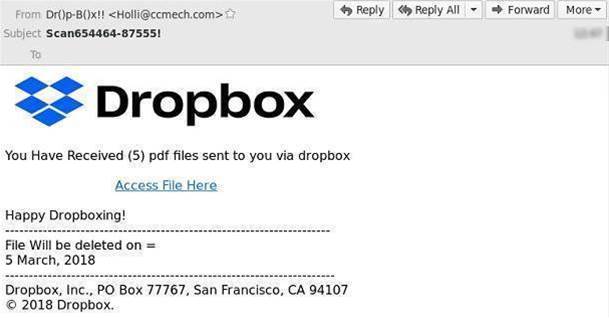 An example of the fake Dropbox email. Picture courtesy of MailGuard.

Nevertheless, the email uses the Dropbox brand and could catch out inexperienced users or those not paying close attention, and the consequences of making a mistake are serious. Phishing emails like this link to a bogus login page that’s are set up to look like the real website, but will actually harvest your login details.

If a message like this arrives in your inbox, don't let curiosity get the better of you.

26 February 2018: MailGuard has warned of a scam campaign of fake Xerox document sharing notification emails that aims to steal your Office 365 credentials. 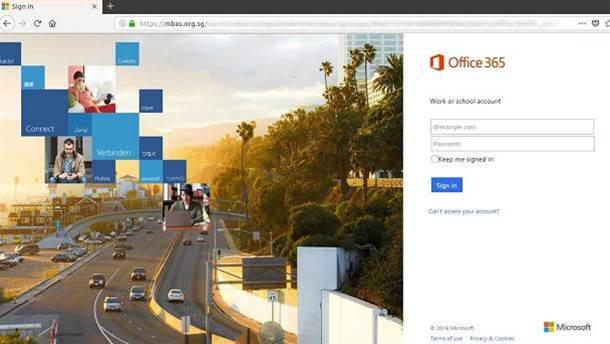 Clicking on the email’s ‘view document’ link takes the victim to a phishing page designed to look like an Office 365 sign-in portal. The aim is to harvest victims’ login credentials as they sign into the fake portal.

28 February 2018: MailGuard has warned of a phishing campaign of fake emails purporting to link to an eBay invoice. The emails contain a ‘view invoice’ link button which links to an archived file containing JavaScript malware.

16 February 2018: Email security provider MailGuard has warned of a phishing campaign of fake emails purporting to link to a Microsoft Dynamics invoice.

The scam is designed to steal victims’ Microsoft login credentials – which could potentially give the perpetrators access to any Microsoft service connected to the account, possibly including Outlook emails, Office 365 documents and OneDrive files.

Thankfully, the fake email is “not very well designed”, according to MailGuard, and the sender’s email address uses the mylocustpoint.org domain, which has nothing to do with Microsoft. 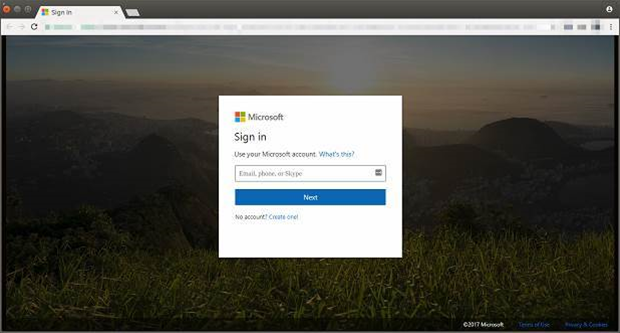 That said, the email uses the Microsoft Dynamics brand and could catch out inexperienced users or those not paying close attention. And clicking the link in the email takes the user to a fake login page that looks like a Microsoft sign-in page.

12 February 2018: MailGuard has warned of two new email scam campaigns, with one purporting to be from Westpac and the other masquerading as an MYOB invoice.

The aim of the fake invoice is to trick users into downloading and executing JavaScript malware, while the bogus Westpac emails are designed to steal customers’ online banking login details and personal information.

The fake MYOB email is well written and formatted, and appears to come from a genuine email account from a company called Craftedeals. It’s not clear whether the sending email account has just merely been spoofed (something that's trivially easy to do), or if that account has been compromised. 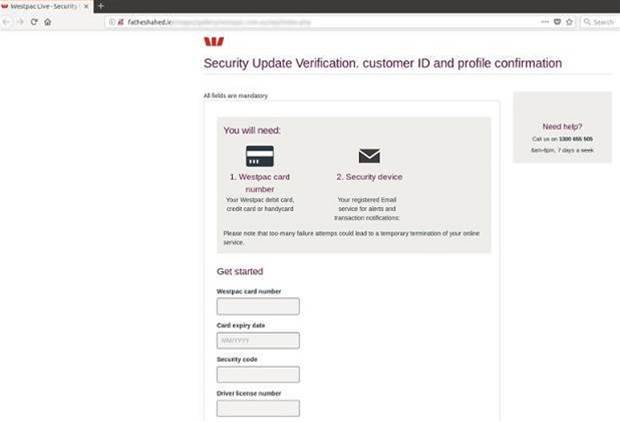 One of the fake Westpac emails (image from Mailguard)

As we’ve pointed out previously (see below), scam emails often come from odd email addresses, and that’s the case with fake Westpac emails from the westpac.co.kr domain and the associated phishing site using westpac.com.

According to the real Westpac site, “Westpac will never ask you to update, verify or correct any Online Banking details directly into an email reply.”

29 January 2018: MailGuard has warned of a scam campaign with fake emails purporting to be a Suncorp Bank wire transfer notification.

The hoax email features the Suncorp Bank logo, but clicking on the ‘Wire transfer details’ link triggers a download of a .zip file containing malicious JavaScript code, according to MailGuard. 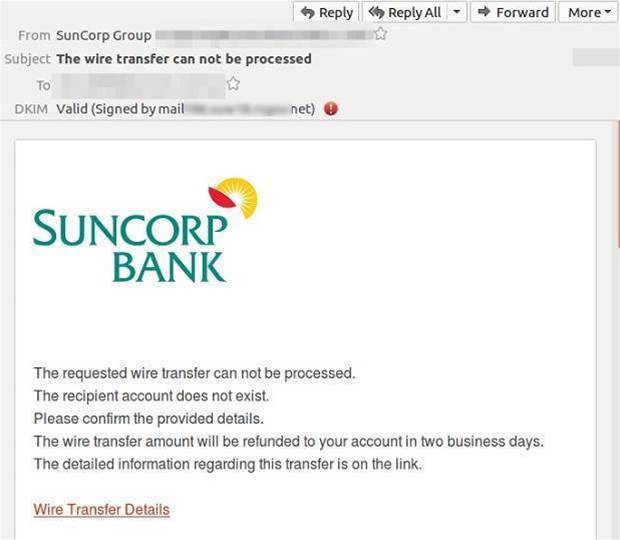 An example of the fake email (image courtesy of Mailguard)

There are tell-tale signs that this email is a scam, with poorly written text and the sender’s email address unrelated to Suncorp. However, other email scams are often more realistic, so you (and your staff) need to be prepared.

24 January 2018: MailGuard has warned of a scam campaign with fake emails purporting to be an MYOB invoice notification.

This hoax email is quite well written and formatted, featuring the MYOB logo and a “View invoice” button. But clicking on that button triggers a nasty surprise: it downloads a .zip file containing JavaScript malware, according to MailGuard. 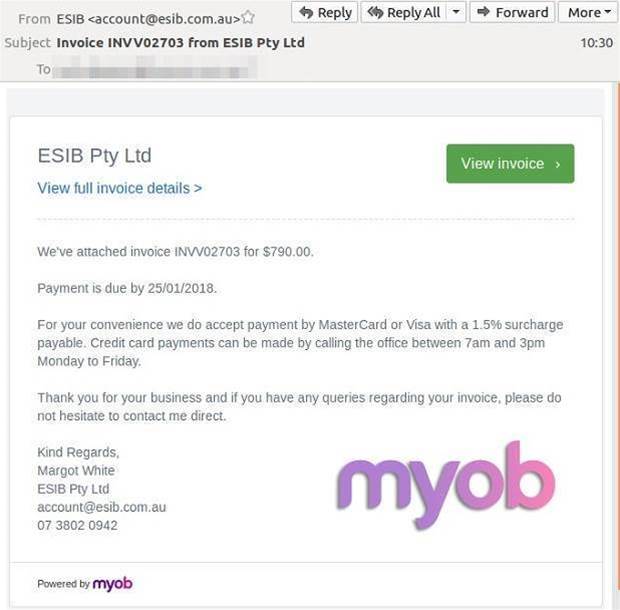 One of the fake emails (image courtesy of Mailguard)

18 January 2018: A campaign of fake emails is purporting to come from the “Revenue Collection Agency” and feature the Australian Taxation Office brand and the Commonwealth Coat of Arms, according to MailGuard.

The fake emails ask recipients to complete a linked “tax form”, but the file is actually a .zip archive containing an unspecified variety of JavaScript malware.

As MailGuard pointed out, the ATO has told taxpayers that it won't (among other things) “send downloadable files or tell you to install software”. It’s not the first campaign of fake ATO emails either. 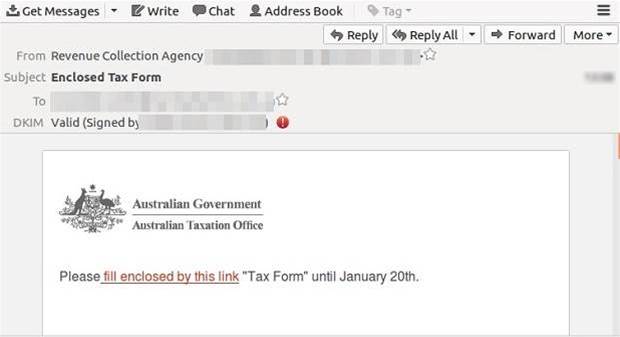 One of the fake emails (image courtesy of Mailguard)

These are just some of the many scam warnings from MailGuard that we have covered.