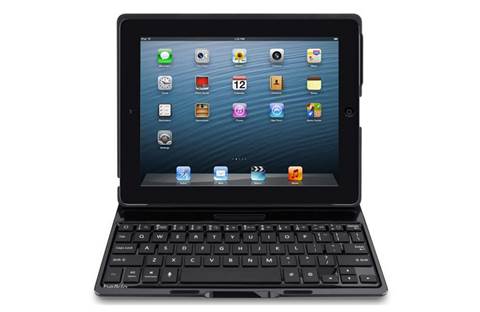 The Belkin Ultimate Keyboard Case has been billed as the slimmest and lightest keyboard folio available so we were curious to see how it compares with Logitech's.

I have spent some time testing the product side-by-side with the Logitech and below are my impressions:

Before we get into the differences, let's look at some similarities.

Both keyboards contain shortcut keys that reduce the need of having to manually reach for the touchscreen or the buttons on the side of the iPad while the keyboard is in use. For example, there are dedicated keys for turning the volume up or down, plus a home key, in addition to cut or paste keys.

It should be noted that Logitech claim a longer battery life than the Belkin, with the manufacturer stating on their website that it will withstand 2 hours of use a day for up to 6 months. Belkin claim a 160-hour battery life before needing a charge. We'll reserve our judgement on battery life until we've done a full review.

Either way, both devices should get you through a few working weeks of continuous use before needing a charge. 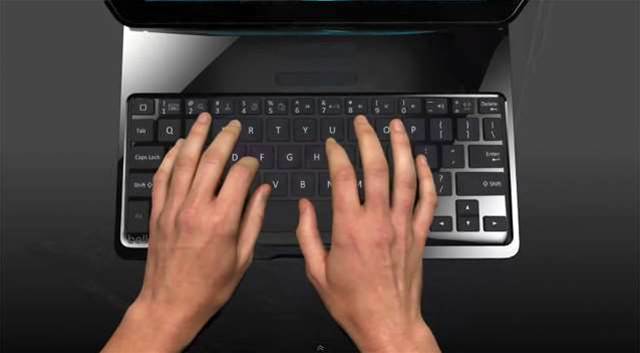 Unlike the Logitech, the Belkin offers additional viewing angle options via the three thin magnetic strips located above the keyboard. This doesn’t dramatically change the viewing angles, but we do appreciate the flexibility of having additional angles to view the screen.

The keyboard is only 6.44mm thick and weighs in at less than 500g, making it thinner and lighter than the Logitech. It will easily slide into a briefcase.

The keys are slightly smaller than the Logitech, making it feel a touch more cramped. Having said that, I didn’t have any trouble adjusting, and I also found that the smaller keys didn’t affect my typing speed in comparison to typing on my desktop keyboard (or the Logitech keyboard for that matter). For this reason, I would say that both the Logitech and Belkin keyboards offer a comparable typing experience.

We found that with the case connected to our iPad it was a little too top-heavy, and this is the lighter iPad 2 we're using. The iPad 4 weighs slightly more.

While I was using it on my lap, the case had an occasional habit of disconnecting from the thin magnetic strips, causing the whole thing to tip over.

You can still use the case in keyboard mode while the iPad is propped up on your lap, but just be aware that this setup won’t be able to withstand to many jolts such as a bumpy train ride or drive.

We suspect this is due to the top-heavy design and the use of small magnets.

This won’t be a problem if you plan on using the device on a completely flat and stable surface such as a desk - it worked fine for that purpose.

The Logitech on the other hand, felt a lot more secure on the lap. It was able to withstand jolts without the magnets disconnecting and tipping over.

We wonder why Belkin didn’t opt for a stronger magnet that spans the entire width of the keyboard base, along with a deeper divot or channel that the iPad could click into much more securely (ala Logitech Ultrathin Keyboard cover).  This, in our opinion, would have done a better job in supporting the weight of the protected iPad and would have given the case more surface flexibility.

The thin magnetic strips also seem to be vulnerable to wear. In the case of our review unit, one of the strips had already begun to peel off from its position.

At a price of $139.95, this is the most expensive keyboard case for the iPad we have looked at - that's $40 more than the Logitech.

We expected a more solid magnet mechanism to prop up the iPad. The fact that we weren't entirely happy with using the iPad on our lap this way, tipped ths scales slightly in favour of Logitech.

The magnets on the Logitech also look as though they will stand the test of time, more so than the Belkin.

For these reasons, the slightly bulkier and heavier Logitech Ultrathin keyboard cover is my preferred choice over the Belkin Ultimate keyboard case.

We recently looked at a bunch of different iPad keyboards, which you can read here. Logitech’s Ultrathin Keyboard Cover was our preferred pick in that roundup.