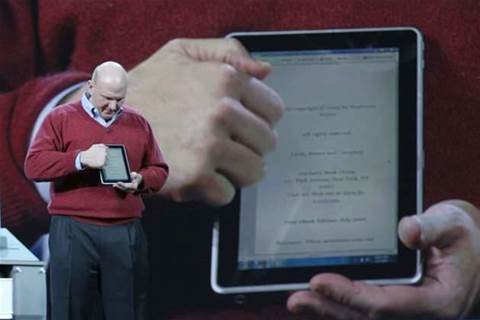 Microsoft chief executive Steve Ballmer has said that the company is looking to develop a slate product using Windows 7 as soon as possible in an effort to compete with Apple..

"It is job-one urgency around here," said Ballmer during a speech to financial analysts at the firm's headquarters in Redmond yesterday.

"We're working with our hardware partners, we're tuning Windows 7 to new slate hardware designs that they're bringing to market. And, yeah, you're going to get a lot of cacophony," he said.

Ballmer did not give a release date for any new products, but hinted at a sense of urgency to get something to market in the near future.

"Some of you will say, when? And I say, as soon as they're ready. Nobody is sleeping at the switch. We are working with partners to deliver products that people really want to go buy," he said.

"There will be people who do things with other operating systems. But we've got the application base, we've got the user familiarity. We've got everything on our side if we do things really right."

Ballmer displayed grudging respect for Apple's success with the iPad, and admitted that it had irked Microsoft.

However, Ballmer confirmed his belief that laptops retain a distinct use in the market. "I've been to too many meetings with journalists who'd spend the first 10 minutes setting up their iPad to look like a laptop," he said.

"Laptops are well designed for a lot of things. I notice they are all light. In fact, if you look around this room, they all weigh zero pounds because they're just sitting on the table."

Microsoft chief operating officer Kevin Turner announced at the same event that IE9 will be available in beta from September.

I have read and accept the privacy policy and terms and conditions and by submitting my email address I agree to receive the Business IT newsletter and receive special offers on behalf of Business IT, nextmedia and its valued partners. We will not share your details with third parties.
Copyright ©v3.co.uk
Tags:
ballmer chief hardware ipad market slate things
By Dan Worth
Jul 31 2010
12:20PM