Aussie startup has a different take on AI 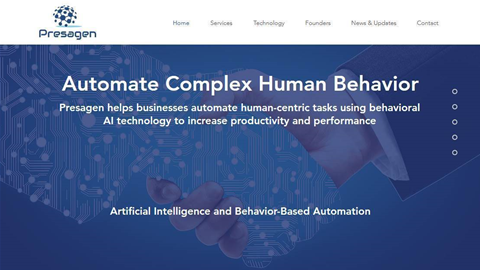 Presagen is looking to automate business processes by applying a variety of artificial intelligence techniques.

Machine learning has become almost synonymous with artificial intelligence (AI), thanks to successes by big technology companies such as IBM and Google in a variety of fields, from self-driving vehicles to natural language translation and medical diagnosis.

However, Adelaide-based startup Presagen is aiming give it and its customers an edge by using a variety of AI techniques – not just machine learning – to automate business processes.

“Machine learning is a powerful AI technique that learns patterns in data, and is suited to data intensive applications like image and speech recognition, and search,” explained Presagen co-founder Dr Don Perugini, who has previously worked with the Defence Science and Technology Organisation (DSTO).

“However, we found in Defence that even for simple tasks that are non-repetitive, machines needed human-like reasoning and intelligence, which is too difficult to achieve with learning or mathematical techniques.”

Don Perugini and fellow Presagen co-founder, Dr Michelle Perugini, have a track record in the area, previously founding ISD Analytics. That company's Simulait software was able to predict the human behaviour of a population of consumers to over 90 percent accuracy, using predominantly publicly available data rather than historical sales or personal customer data. ISD Analytics was acquired by Ernst & Young in 2015.

Presagen plans to initially use its new platform in-house to create a suite of automation products accessible to businesses on demand.

“Presagen will use a risk-reward model and only charge based on business outcomes when businesses see automation in action, reducing the risk and barrier to using this new world-leading technology,” said Michelle Perugini.

In the longer term, the behaviours and automated tasks will be made available to developers so they can be incorporated in other products.

“People are working more hours than ever in an increasingly complex and open work environment with more data, people, and tasks to deal with,” she said.

“Many of those manual tasks and processes can be delegated to software to allow people to do what they do best - the creative aspects of their jobs.”

The two doctors are also the co-founders of Life Whisperer, which “provides AI-driven decision support for non-invasive image analysis to improve embryo selection for IVF, and to ultimately improve outcomes for couples wanting to have children.”