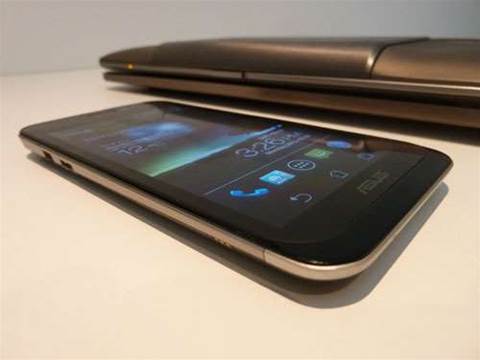 The ASUS Padfone is one of the most unusual laptops you'll see, and is being earmarked for businesses, says ASUS

The all-in-one mobile Padfone combines a 4.3-inch Android smartphone with a 10.1-inch tablet. It was first unveiled at the Computex trade show in Taipei last year.

Although the device was aimed primarily at the consumer sector, Asus' territory product manager Fei Yen said it was also being earmarked for enterprise customers.

Yen said Asus had received "a lot of enquires" from enterprise customers in countries where the Padfone has already been launched. She did not disclose whether the company had been approached by any businesses locally.

Asus expected the "commercial market" to account for approximately 30 percent of all Padfone sales, she said.

"I think a lot of enterprise customers will appreciate the Padfone's all-in-one convenience [as well as] its extended battery life," said Yen.

"You don't need two separate adaptors to charge [the] tablet and phone. ...You also don’t need to buy extra data or another SIM card. Everything is already in the smartphone."

When asked about enterprise-grade IT security, Yen acknowledged that the Padfone did not offer a business solution out of the box.

"Internally, we don't really develop security software ourself," Yen said. "Our partners, if they want to, can install security applications themselves and sell them to the enterprise customer."

The Padfone smartphone has a 4.3-inch Super AMOLED screen with a native resolution of 540x960 pixels. It comes with 32GB of internal memory and has a 1.5GHz Snapdragon S4 CPU running on the latest version of Android: 4.1 Ice Cream Sandwich.

Other highlights include Corning Gorilla Glass, a microSD card slot and an eight-megapixel camera.

The phone slots into the back of the Asus Padfone Station dock which boasts a 10.1-inch WXGA touchscreen with a native resolution of a resolution of 1280x800 pixels.

The Padfone Station automatically adjusts apps for the larger screen, allowing for a smooth transition from phone to tablet.

The Padfone smartphone and tablet station are bundled together for $999. An Asus Transformer keyboard attachment is also available for the device.