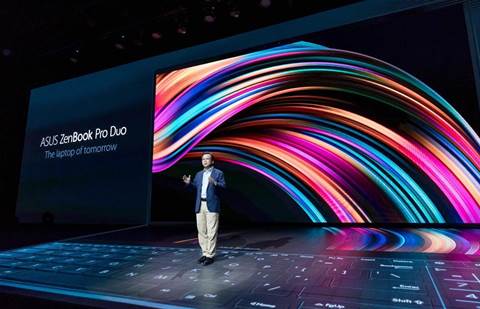 The parade of dual-screen laptops continues as ASUS has revealed its own version as its headliner for this year’s Computex.

The ZenBook Pro Duo features a 14-inch 4K multi-touch display called the ScreenPad Plus. The display sits above the function keys on the laptop's keyboard, in addition to the main 15.6-inch 4K OLED display.

ASUS said the ScreenPad Plus offers “a larger and full-width display, a more intuitive design, seamless viewing experience and improved multi-screen workflow”. It also has some built-in productivity apps and quick controls to help navigate between the two displays.

The company said the laptop’s main target would include photographers, video editors and music artists, while those working with visual arts and graphics can take advantage of the active stylus.

On the hardware side, the laptop is 2.4cm thick and weights 2.5kg. It is powered by either a six-core Intel Core i7 or eight-core Core i9 processor and NVIDIA GeForce RTX 2060 graphics.

ASUS also has a less expensive and smaller 14-inch model called the Zenbook Duo, which has 1080p screens instead of 4K, NVIDIA GeForce MX250 graphics and is only available with a Core i7 chip.

The company has yet to reveal pricing or availability, but consumer title The Verge said both models are expected to land in the third quarter of this year.

Earlier this month, Lenovo unveiled a Thinkpad with a 13.3-inch foldable screen and HP unveiled what it claims is the world’s first dual-screen gaming laptop, the Omen X 2S.