ASUS also has a mammoth tablet on the way 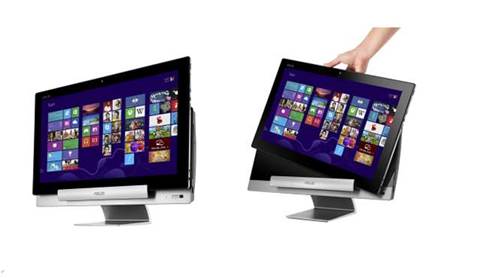 If you like the idea of giant tablet computer for showing off drawings or presentations to clients, then you might be interested in the upcoming ASUS Transformer AiO.

Like the Dell XPS 18, the ASUS Transformer AiO is a fully functional Windows 8 multi-touch desktop computer complete with a wireless keyboard and mouse that also has the ability to be lugged around as a giant, Windows 8 tablet.

But that’s where the similarities end, as the AiO has a couple of features that sets it apart from the Dell XPS 18.

Firstly, press a button on the side of the screen while in tablet mode and it switches to Android or Windows 8 - handy if you regularly edit documents. Or if you use apps on your Android phone or “normal sized” tablet and want to take up where you left off when you’re back in the office.

The other unique feature is the ability for the Transformer to be used as two Windows 8 PCs, provided you connect an external monitor to the base station while the main display is being used as a tablet.

For those interested in the technical aspects, the Transformer doesn’t skimp on processing power or other feature - there is a 1080p IPS touchscreen display, Intel Core i5 processor, Nvidia graphics, DVD drive, 8GB of RAM and a 1TB hard drive in addition to an Tegra 3 chipset with 32GB of on board storage for Android.

No word on Australian pricing or availability but ASUS has said that it expects the device to land on our shores before June.

Copyright © BIT (Business IT). All rights reserved.
Tags:
aio all in one android asus hardware tablet
By Krishan Sharma
Apr 3 2013
11:43AM