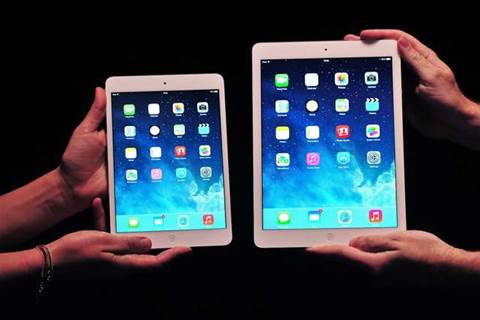 Good news if you've been holding off an buying a new iPad, iPad mini or Macbook, with Apple today unveiling new models, plus a free new operating system.

While a new iPad Air and iPad mini are getting much attention, other interesting news from Apple today is that iWorks and iLife will be bundled free with new Macs.
Apple unveiled new versions of its iWork productivity suite and iLife creativity applications that run on both the OS X personal computer operating system as well as the iOS mobile one.
The iWorks and iLife apps are now fully 64-bit and integrate with Apple's iCloud service, which provides browser-based cross-platform access to documents.
Apple will bundle iWorks and iLife for free with new Macs. Existing iLife and iWorks users can update their suites for free if they upgrade to the new version of Apple's OS X operating system, Mavericks.
Mavericks is also a free upgrade, and on stage in San Francisco, Apple senior executives Phil Schiller and Eddy Cue took several potshots at rival Microsoft, which charges US$199 for the Windows 8.1 update and subscription fees for its Office 365 productivity suite.
New iPad Air and mini
Newsletter Signup

I have read and accept the privacy policy and terms and conditions and by submitting my email address I agree to receive the Business IT newsletter and receive special offers on behalf of Business IT, nextmedia and its valued partners. We will not share your details with third parties.
Apple also unveiled the iPad Air with a 64-bit A7 processor, high-resolution retina display and cloud-enabled productivity software bundled for free with devices.
Weighing less than half a kilogram, and 28 percent thinner than the fourth generation iPad, the Air model also has a narrower bezel.
Meanwhile, the new iPad mini also has the 64-bit A7 chip and comes with a 2048 by 1536 pixel retina screen, providing 326 pixels per inch density for clearer text and images.
Both the iPad Air and mini have new wi-fi circuitry and antennae that allow for theoretical maximum speeds of 300Mbps, Apple said, and the LTE 4G cellular broadband support has been widened to work with bandplans in more countries.
In Australia, the iPad Air will go sale on November 1 starting at $598 for the 16GB wi-fi only model, reaching $899 including GST for the 128GB version. Adding LTE support bumps up the price for the 16GB iPad Air to $749, and to $1049 for the 128GB model.
Available late November, the iPad mini with retina display will retail for $479 for 16GB storage and wi-fi only, wiith 32, 64 and 128GB models costing $598, $699 and $799 respectively.
LTE equipped iPad minis will cost between $629 and $949 in the above storage configuratiuons.
New MacBook Pros with Haswell processors
As expected, Apple came out with updated MacBook Pro laptops, using Intel's latest Core i5 and i7 "Haswell" processors that promise better performance and lower energy consumption.
The new laptops come with 13 and 15-inch retina high-resolution displays and provide nine and eight hour battery life respectively, Apple said. They also feature a thinner, 18mm design and will be assembled in the United States.
Processors up to 2.8GHz dual-core Core i7 can be specified for the 13-inch model, and up to quad-core 2.6GHz Core i7 for the 15-inch one. Both use high-speed PCI Express Flash memory storage, and have 802.11ac wi-fi and Thunderbolt 2 ports.
Australian pricing for the 13-inch MacBook Pro starts at $1599 for a dual-core Intel Core i5 processor at 2.4GHz, 4GB RAM and 128GB storage and Intel CPU graphics.
The 15-inch model starts at $2499 including GST. That money buys a 2GHz Core i7 quad core procesor, 8GB RAM and 256GB storage, but no discrete graphics card. A model with an Nvidia GeForce GT 750M graphics card goes for $3199 including GST and also provides an uprated Core i7 processor at 2.3GHz, 16GB memory and 512GB of storage.
Mac Pro out in December
The tubular design Mac Pro that Apple announced at its Worldwide Developer Conference (WWDC) in June this year will go on sale in December, starting at $3999 including GST.
After a long time of not providing updates to the Mac Pro range, Apple has stacked the new model with high-performance options such as twelve-core Intel Xeon E5 processors and dual AMD FirePro workstation class graphics cards.
Mac Pro also comes with PCI-Express connected Flash memory storage.
SIx 20 Gbps Thunderbolt 2 ports allows for up to 36 devices to be daisy-chained and connected to a Mac Pro. The Thunderbolt 2 connectivity also support networking with self-configuring addresses.
Despite the beefy hardware, Apple claims the new Mac Pro uses 70 percent less power than the previous model, consuming 43 Watts at idle, meeting Energy Star 6.0 requirements and achieving a US EPEAT Gold Star rating.
Copyright © iTnews.com.au . All rights reserved.
Tags:
air apple hardware ilife ipad iwork macbook mavericks pro software
By Juha Saarinen
Oct 23 2013
12:08PM