Apple unveils 9.7in iPad Pro: Zapped with a shrink ray 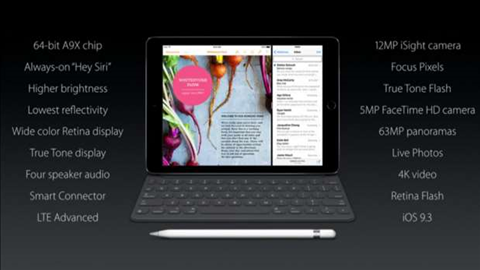 Apple has revealed a smaller model of the iPad Pro, measuring in at 9.7 inches and featuring Apple Pencil support, four speakers and an A9X chipset.

Zapping last year's iPad Pro with a shrink ray, Apple has opted for a follow up to last year's professional tablet instead of the Pad Air 3. This chimes with recent reports that Tim Cook and Co would launch a smaller iPad Pro to go alongside its 12.9in predecessor, drawing a parallel to Apple's approach with the MacBook Pro and its 13in and 15in variants.

Why bring out a new iPad Pro? Phil Schiller took to the stage claim 200 million iPads have been sold with a 9.7in display, suggesting people have an appetite for the Pro's capabilities in a smaller package.

The new iPad Pro comes with the iPad Pro's Oxide TFT display. It's apparently 25% brighter than an iPad Air 2, works with Night Shift and something called True Tone display – which measures “colour temperature” and adapts the colour of the screen to suit.

In terms of performance, the new iPad Pro comes with the original Pro's A9X processor. It will also feature Siri, and support both a smart keyboard designed to suit the 9.7in retina display, and the Apple Pencil.

I have read and accept the privacy policy and terms and conditions and by submitting my email address I agree to receive the Business IT newsletter and receive special offers on behalf of Business IT, nextmedia and its valued partners. We will not share your details with third parties.
Copyright © Alphr, Dennis Publishing
Tags:
apple apple pencil hardware ipad macbook pro smaller ipad
By a Staff Writer
Mar 22 2016
4:11PM