Apple iPhone SE vs iPhone 5S - is it worth the upgrade? 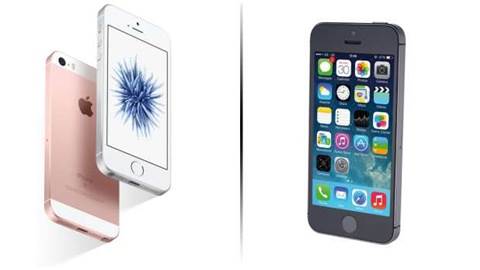 Apple's new compact phone looks like a warmed-up iPhone 5s, but it's much, much more than that

The news that the Apple were going to launch a smaller 4in phone iPhone SE came as no surprise to anyone at Apple's spring event, but that it bore more than a passing resemblance to the nearly three-year-old iPhone 5s was a bit more of an eye-opener.

Given the iPhone 5s is the handset many potential iPhone SE customers will be upgrading from, it's going to take a lot to persuade them that moving to a new phone that looks identical to their old one is what they want to do.

To help you make that decision - whether to stick with your 4in phone or ignore the new handset and move up to a larger screen - here's how the two phones compare with each other.

Design-wise, there's not an awful lot to tell between the two, and this could be the undoing of the iPhone SE. The SE is a single gramme heavier than the iPhone 5s, and the chamfered edges now have a matte finish instead of a gleaming exposed metal one, but otherwise the two handsets look precisely the same.

The volume buttons are circular, just like the 5s, the coloured insets at the top and bottom of the rear of the phones look the same, and all the detailing from the speaker grilles to those strips that let the signal through to the antennas are all identical.

Yup, if you upgrade from your ageing iPhone 5s, you may not be able to tell the difference between the two, although the new handset will almost certainly look shinier and newer than your battered old iPhone 5s.

On the one hand, that's not ideal, but by opting for a phone with exactly the same design as your old one there are some positives. You won't have to buy a new case for your phone for one - something to bear in mind.

The iPhone SE's screen falls into the same category as the design. It's basically the same as on the 5s.

Not that this is a bad thing. The iPhone 5s' display was classed as a “Retina” display and so is the 1,136 x 640 screen on the iPhone SE. It's just as sharp, and likely will look pretty similar as well in terms of quality.

We won't know the full story until we have one the device in our hands for testing, but one small snippet Apple did let slip was that the screen of the iPhone SE will have a contrast ration of 800:1.

That's a little lower than our measurement of the iPhone 5s, which came in at 972:1, and a lot lower than the iPhone 6s' 1,542:1. Will this affect your enjoyment in using the phone? Probably not. Although 800:1 isn't up with very best these days, it's still more than respectable.

So far you might be forgiven for wondering what on earth Apple is playing at here, but get ready to have your expectations completely overturned, because the iPhone SE is a completely different animal when it comes to the internals. 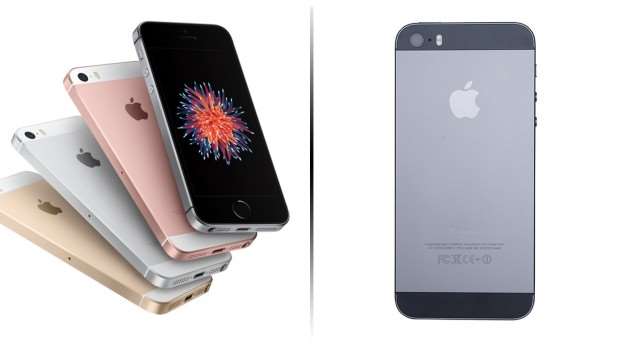 That's because the specifications match, almost blow for blow, what's inside the flagship iPhone 6s, and that makes the iPhone SE a hugely powerful smartphone.It has Apple's latest smartphone processor - the Apple A9 - which remains one of the most powerful smartphone chips around, despite the best efforts of Apple's rivals.

It has Apple's latest smartphone processor - the Apple A9 - which remains one of the fastest smartphone chips around, despite the best efforts of Apple's rivals. It also has the M9 coprocessor integrated on the chip, enabling the “hey Siri” wake-up phrase when the phone is in standby and disconnected from the mains.

Perhaps most importantly, though, Apple is transplanting the camera from the flagship iPhone 6s over to the iPhone SE, with its 12-megapixel resolution, f/2.2 aperture, 4K video and super-tough sapphire crystal lens cover.

Result: A big win for the iPhone SE

What really counts, however, is the price. When the iPhone SE hits the shops later this month it won't cost a fortune, and for what is essentially an iPhone 6s in a more compact package, that's the critical thing.

So even if it's not the cheapest on the market, the SE is the cheapest powerful iPhone, and the saving over the 6S is significant enough to be worth your consideration.

Love the small screen of your iPhone 5? Then the SE upgrade is a no-brainer.

I have read and accept the privacy policy and terms and conditions and by submitting my email address I agree to receive the Business IT newsletter and receive special offers on behalf of Business IT, nextmedia and its valued partners. We will not share your details with third parties.
Copyright © Alphr, Dennis Publishing
Tags:
apple apple iphone hardware iphone 5s
By a Staff Writer
Mar 24 2016
6:22PM